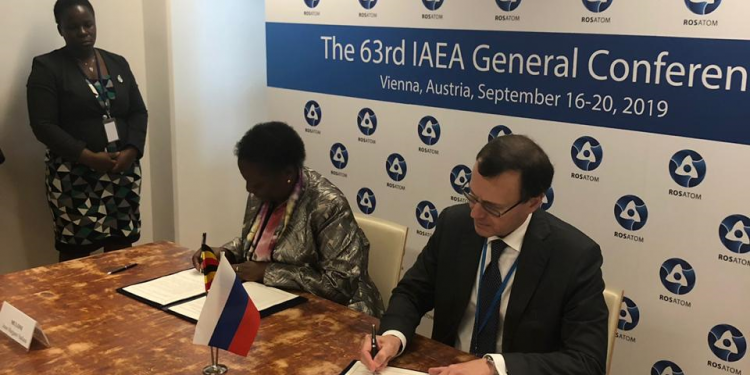 Nothing worries the US as a partnership between its rivals Russia or China with African countries. Over time, the scramble for Africa continues with countries from the East like Russia and China continuing to win the hearts of many African governments.

In the latest news, Uganda and Russia have signed an intergovernmental agreement on cooperation in the peaceful uses of nuclear energy on the side-lines of the 63rd IAEA General conference in Vienna.

On behalf of Russia, the document was signed by Nikolay Spassky, Deputy Director General – Director of international activities of Russian State Atomic Energy Corporation Rosatom, on behalf of Uganda by the Minister of state for energy and mineral resources of the Republic of Uganda Eng. Muloni Irene Nafuna.

The agreement meets all modern requirements for such documents and lays the foundation for practical cooperation between Russia and Uganda in the peaceful uses of nuclear energy. In particular, it implies joint work in such areas as the creation of nuclear infrastructure, production of radioisotopes for industrial, healthcare, agricultural use, as well as education and retraining.

The parties agreed to exchange visits for industry experts in the near future and to create workgroups for specific applications like in specific areas, including the construction of the Center for nuclear science and technology in Uganda on the basis of a research reactor of Russian design, which is a complex but promising endeavour.