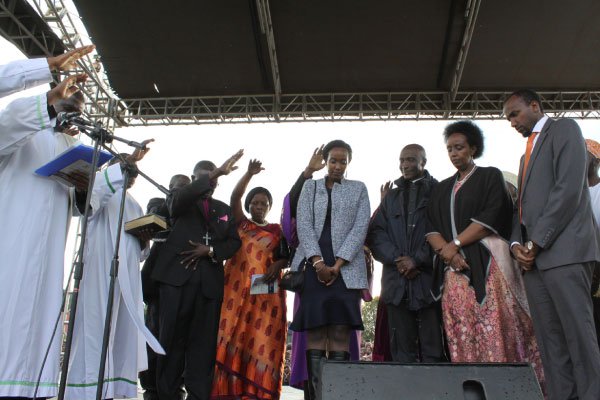 Last week Uganda ranked was in high in Global news after the US Treasury Department travel sanctions on former Inspector General of Police Kale Kayihura blew off the veil on his family, sucking in his wife Angela Umurisa Gabuka, daughter Tesi Uwibambe and son Kale Rudahigwa.

The US government or Trump administration like others would call it, slapped sanctions on Gen Kayihura over alleged human rights violation, corruption and enrichment during his term of office as the head of the Uganda Police Force.

Let it be known that Kayihura is one of the longest-serving Inspector General of Police in the history of the Police Force. He assumed office in 2005 until he fell out with his boss President Museveni in 2018 who replaced him with his deputy Martin Okoth Ochola.

Until the sanctions, Gen. Kayihura’s family had been out of the limelight and very little or nothing was known about them.

Today we bring you exclusive information about the family of Gen. Kale Kayihura;

Born in Kenya, Angella is a relative to the late Mutara Rudahigwa III, the king of Rwanda in the 1950s.

Mrs. Kayihura is a teacher by profession who gave up teaching to look after her Family.

She is reserved but very frank, Open and forceful where it is required. A source close to the family revealed that Angella is a very generous woman who has been taking care of the vulnerable children in the Muyenga community where they live.

Despite being reserved, Mrs. Kayihura is feared by everyone at her home because she prefers things done her way to perfection and any dissent or divergence attracts immediate fallout.

Angella first appeared on the public scene about five years ago when her sister Jacqueline Uwera Nsenga was appearing before the high court for trial over the murder of her husband Juvenal Nsenga.

Kale holds a  Bachelor’s degree in Law from the  University of Buckingham, UK. He went to St Mary’s College Kisubi for secondary education between 2003 and 2008, the same school his father attended in the 1970s.

Kale is believed to have inherited his father’s Marxist ideas. He went to UK for his tertiary education where he studied a course in oil and later joined the University of Buckingham from 2013 to 2016 returning in 2017 to become his father’s aide, a duty he has maintained to-date.

Ms. Uwibambe, like her mother, is a quiet and reserved person, according to those she has worked closely with her compensating her oratory shortfalls with written expressions. Her views have been published by several media houses, especially in the United States.

Ms. Uwibambe attended the International School of Uganda where she completed high school in 2011 joining Seattle University in Washington.

At Seattle University she studied public affairs specializing in health policy and graduated in 2016.

In an article about leaders for Africa she authored, Uwibambe said right from childhood, she knew community service was her passion as opposed to making money.

“All I knew very early in life was that I wanted to help people in some way. My peers often questioned me on why I did not have the ambition for making a lot of money, becoming rich and famous. I always felt drawn to serving others, especially those less fortunate than I, as opposed to earning heaps of money to spend on myself,” Ms Uwibambe wrote.

She added: “This, together with my love for Uganda, led me to choose between being a soldier in the Ugandan army to defend my country, or to work in the medical field. Since I am not sure of my physical strength, I have chosen to follow the path of medicine where I can find ways to improve the health sector in my country.”

It is her love for health issues that could have influenced her parents to rehabilitate Kisoro Referral Hospital’s children ward, donate incubators, beds, beddings and oxygen concentrator in 2017.

While in the United States, Uwibambe was an ardent writer and human rights activist regularly contributing articles to Seattle University newspaper. Many of her articles advocated rights of women and minorities such as black people and gays.

She also did research in police and vigilante violence towards communities of colour and the dynamics that play into the systems that perpetuate such violence in Seattle.

On return to Uganda in 2017, Tesi joined the World Food Programme in Rwanda where she worked on health policy issues.

However, It is alleged that she returned to Uganda after the Rwanda-Uganda relations conflicts last year and reports about what she is currently doing are not clear.

She also attended the court martial proceedings where her Father Gen. Kale Kayihura was Paraded.

Under Kayihura’s reign, the Police became notorious for torture and use of teargas to break up riots. In this ﬁnancial year, over sh44b was allocated to purchasing teargas. Teargas became a major tool of keeping demonstrators at bay, countrywide. He was accused of enlisting former criminals into the force, without any professional training.

Gen. Kayihura faced numerous challenges in his last days as Police chief, with the murder of scores of Muslim clerics, Assistant Inspector General of Police Andrew Felix Kaweesi as well as the kidnaps and the murder of women. The last straw was his open clash with then security minister, Lt. Gen. Henry Tumukunde, plus other security chiefs.