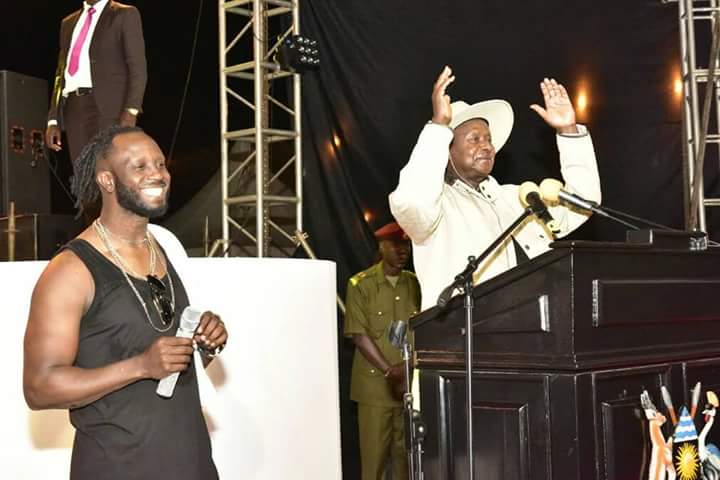 The name Bobi Wine or Robert Kyagulanyi Ssentamu is on the lips and minds many Ugandans. This rising popularity and fame of Bobi Wine have not spared even the head of state President Yoweri Kaguta Museveni.

While speaking during local musician Catherine Kusasira Sserumaga’s concert at Serena hotel yesterday evening, President Museveni threw the hall in a frenzy when he mistakenly called Bebe Cool “Bobi” before catching himself mid-sentence.

However, it was too late as those in attendance burst in loud laughter and cheering at Museveni’s honest mistake. He smiled it off and corrected himself.

Museveni was speaking about the various music concerts he has attended citing Kusasira’s event as the third in those he has been to.

“I have attended many concerts. I think this is the third. There was one in Munyonyo and then another by my son Bobi…” Museveni said.

About last night: When the high-priest (kabona) mentioned the name JESUS during a Stanic sermon and the crowd went in total disorder.
🤣😂🤣🤣

Despite his honest slip of the tongue, Museveni revealed to those who thought he was taking Bobi Wine lightly that indeed the old man was worried about Bobi and constantly haunted by his rising popularity so much so that his name is in his head and on his mind.

In attending Kusasira’s concert, Museveni continues his futile attempts to stifle the growing voices calling for change led by local artists and musicians. Through NRM leaning musicians like Kusasira, Museveni hopes to make an en route into the growing base that supports the former musician now turned politician.