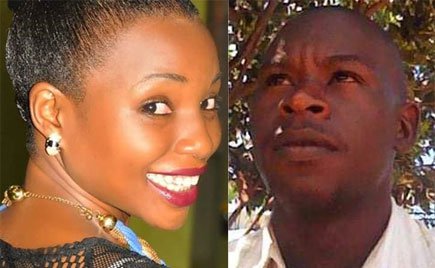 The latest news is that four people implicated in the murder of a social work Maria Nagirinya and her driver Ronald Kitayimbwa have been charged with six counts before Natete/ Rubaga Magistrate’s Court.

Coporiyamu Kasolo alias Arsenal, a shoe hawker in Nateete, Johnson Lubega, unemployed youth of Kigaga zone in Nateete, Nassif Kalyango and Hassan Kiseeka both boda-boda cyclists in Kitaka Zone in Nateete appeared before Grade one magistrate, Mr Joel Wegoye where murder, kidnap and Aggravated robbery charges were read to them.
However, they were not allowed to take plea because their offences are capital in nature and can only be heard by the High Court.

Social work Maria Nagirinya and her driver Ronald Kitayimbwa were kidnapped and killed on August 28, 2019

“The offences you are charged with are capital in nature and can only be heard in the High Court,” Mr Wegoye told the suspects.
The group has been further remanded to Luzira prison until the September 27, when their case will return for mention.
However, the magistrate told the suspects that they will not be physically taken to court as proceedings will be via video-conferencing at Buganda Road court.