Ronald Mayinja reveals what he told the President, when they shook hands at Kusasira’s concert 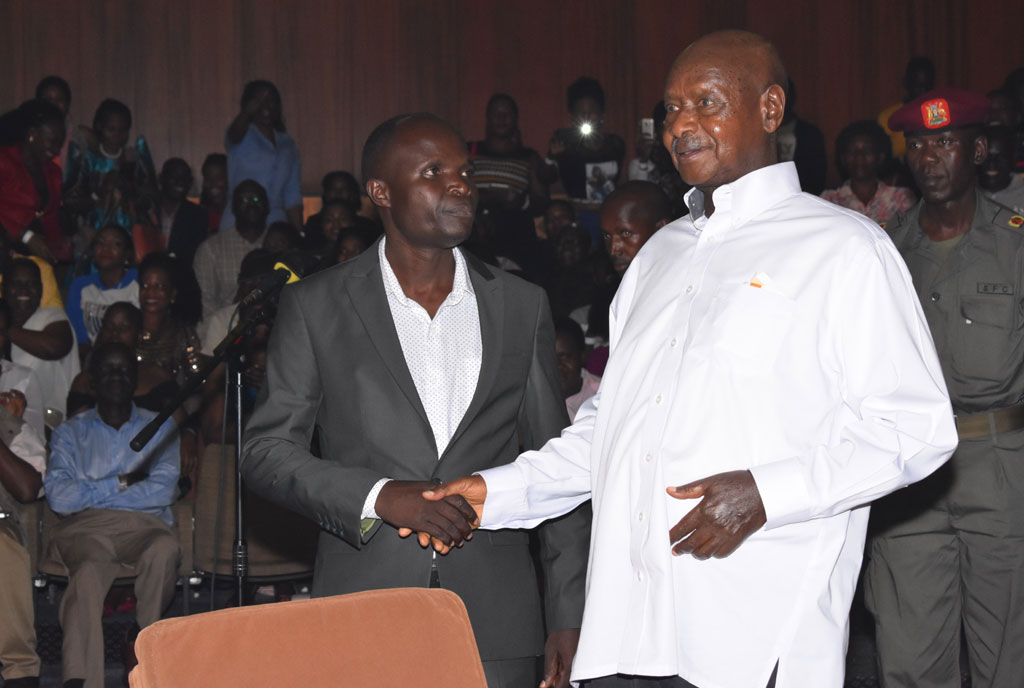 Artiste Ronald Mayinja popularly known for his “Tuli Ku bukenke” song was the Hero of the Night Last Friday at Catherine Kusasira’s maiden Serena Concert titled tears of a woman.

Kusasira’s Show was graced by the President and it has been the talk of the town because of Mayinja’s confidence and Boldness he showed while performing his “Bizeemu” song in the Presence of the President.

Mayinja is one of the artists that sing about real-life situations of the Omuntu wa wansi and his Bizeemu song he was voicing a repeat of bad leadership, collapsed economy, poor health sector, insecurity in Uganda which would on any day not be appreciated in Museveni’s presence, but here was Mayinja singing away to each of the lyrics.

Kusasira who had invited Mayinja to curtain raise for her was seen having a small talk with Mayinja on stage after she tried to snatch the microphone away from him but he resisted.

Mayinja’s Performance was one of a kind and it was heroic in a such a nature that Museveni was prompted to lush out at Mayinja saying that his song and it’s lyrics do not Portray the Uganda he leads adding that it’s a lie.

“This is good for entertainment and business, but should never be to the detriment of strides made in bringing our country out being a failed state. For example, I disagree with one of the singers who was saying “Bizeemu”, as if to say that this NRM government is committing crimes against its people!” Museveni said

According to Mayinja, he notes that the song he sang was not bad adding that he is a happy man that his message was well received by the President even when he does not agree with it but at least he replied.

“The song was not abusive; what bad thing is in it? I am happy the president gave a reply, he explained that his government is not the one facilitating crime against its people and I understand his position,” Mayinja claimed.

Mayinja also noted that when Museveni summoned him to shake hands, they had a quick dialogue where he suggested that the Government grants Artistes a ministry that will grant them space and Platform to air out their views other than being under the Ministry of Gender.

“When I was called to shake the President’s hand, I walked there and when with him I told him of my suggestion to create a ministry for artists. I just hinted on it and he replied in affirmative. I am still not sure I achieved the goal of making that petition because the environment was not enabling enough for the President to get my point fully. But I will be happy if he worked on it,” Mayinja said.

Mayinja the Hero has also praised Museveni that he is a listening and sober president who is capable of working on things that his people complain about but he is limited by the People that surround him who have selfish interests.

“What I know about Uganda’s president is that he is sober. He differentiates between sense and nonsense. I am sure that he knows the issues I sang about and he will work on them with his wisdom.”

Ronald Mayanja is one of those artists who have stood the test of time in the Music industry of Uganda and is currently vying for the Gomba East Member of Parliament seat. He is also part of the Musicians who recently announced that they would join politics come 2021 with inspiration from Kyadondo East Legislator  Robert Kyagulanyi Ssentamu.