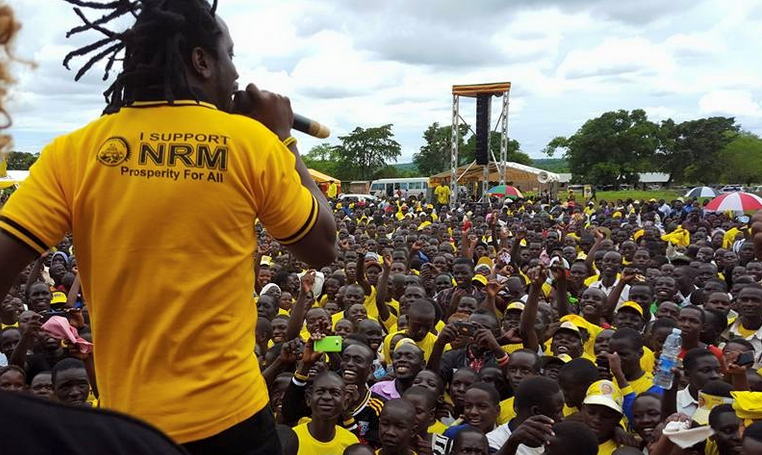 According to the Nile Post, singer Bebe Cool is chest-thumping for apparently helping the NRM to defeat Bobi Wine’s People Power in the Hoima By-elections.

Bebe Cool was the lead act at many of NRM’s rallies, providing entertainment and mobilization of youth, together with artistes Catherine Kusasira, Phina Mugerwa Masanyalaze, and socialite Charles Alim alias Sipapa.

In a very well attended rally at Boma Grounds in Hoima Municipality, Bebe Cool sang all his songs while he moved the crowd to sing along, chanting the NRM, Museveni and Harriet Mugyenyi.

Last night while election results trickled in, Bebe Cool took to his social media platforms with one of the rally videos and captioned: “Oyo Mwesobolela (I can handle Bobi Wine myself) yes thank you Hoima…..congz AKIIKI HARRIET.”

According to NRM leadership, Bobi Wine has been beating them using his music as a mobilization tool. In the different elections, he has won, the NRM has not deployed well from the entertainment industry.

“We did not have Bebe Cool in Arua, or Bugiri, or Jinja East. This time we carried him to Hoima to counter the music aspect. Indeed, Bebe is bigger, because he managed to grab all audiences away from Bobi and we headed to our victory” a source said.

We cannot attach any more importance to this foolhardy.