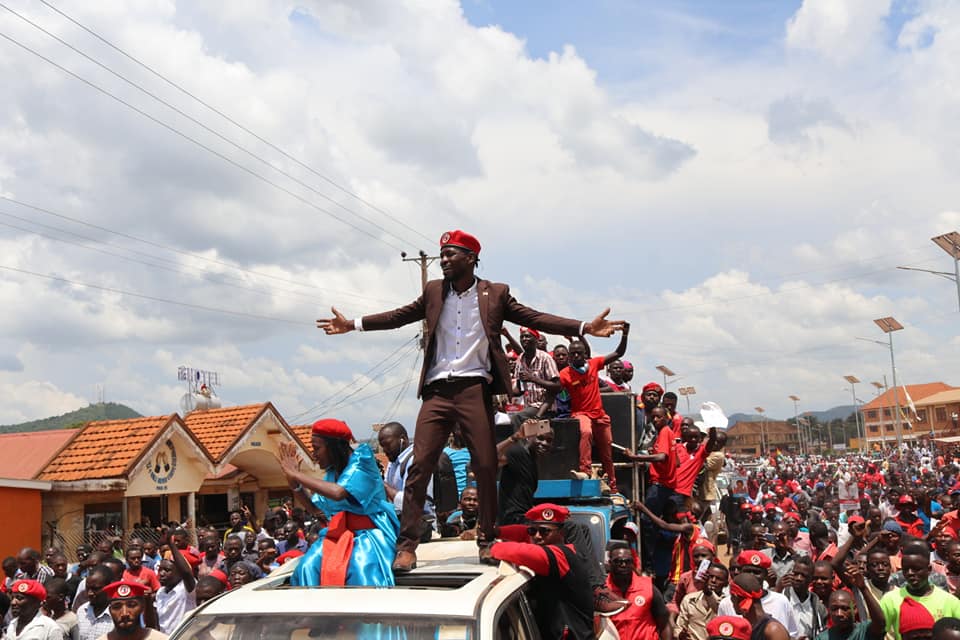 People Power boss and Kyadondo East legislator Robert Kyagulanyi aka Bobi Wine has spoken out on the outcome of the Hoima Woman MP by-election. Bobi Wine has said he was utterly dissatisfied with the way NRM rigged the election and stole the people’s victory.

Below is his full statement:

I have restrained myself from speaking about what has been going on in Hoima for the past two days. Now that a candidate was declared winner, I will say a few things.

First, let me congratulate comrade Nyakato Asinasi Kamanda, our candidate for Hoima Municipality Woman MP. Thank you for putting up such a spirited fight. You did not have even 1% of the resources poured into this election by the NRM regime, but you did your best- waking up each day to move to the nearest and farthest points of Hoima district. You are a true fighter. The people of Bunyoro have a great asset in you. I congratulate the people of Hoima; the people of Bunyoro for making every effort to exercise your constitutional right to vote despite untold levels of intimidation by the regime. Thank you for embracing the message of change is such an incredible way. I can understand the level of disappointment you have today as you wake up to have another leader imposed on you; your will usurped. But courage my friends- ultimately, the battle shall be won!

Second, I congratulate and appreciate the forces of change for coming together in a rare display of unity in Hoima. I thank the many leaders in FDC, ANT, DP and other forces who have been positive to this cooperation. There were challenges of course. There are those who have decided at every point to put their personal or party interests above the interests of the people of Uganda. We condemn this behaviour and moving forward, we must have discussions and decide what is more important.

As #PeoplePower, we came in to support an FDC candidate simply because we place the struggle for a better Uganda above anything else. It defeated all logic to see some leaders, apparently in the opposition, do everything to frustrate comrade Nyakato’s victory simply because she embraced and identified with #PeoplePower.

Third, I want to join my fellow leaders and other Ugandans in condemning the very high levels of election malpractices that were displayed in this election. As I did mention a few days ago, security forces have for these past days deployed in Hoima, not to keep law and order but to help Museveni and his regime rig this election. So many of our candidate’s supporters and agents were arrested. Many were brutalized. Some of them are held in detention centres outside Hoima. On the day of voting, many were brutally chased away from polling stations. The tally center was raided.

Our teams on the ground spent the day in running battles with vehicles which had pre-ticked ballots in favor of the NRM candidate. Available information shows that they took advantage of the vastness of the district to stuff ballots early morning in remote areas, and were caught later in the day. Several people recorded these things on video, which is why Museveni and his regime are moving to ban cameras from polling stations come 2021.
Her team has Declaration Forms which show different results from those which were declared. We shall support the candidate in every way if she seeks to challenge these violations. But let me also make it clear that these gross violations only make us stronger! They give us more reason to fight on. They prove to us that our cause is the right cause! Therefore we are not fazed- we are only challenged to work even harder.

Therefore, I want to encourage the people of Uganda not to lose sight of the cause and the urgency with which we must work. This whole night, I have been on phone with our foot soldiers and supporters who are understandably very angry and frustrated with the regime. Some are very disappointed and frustrated with the behaviour of some elements within the forces of change. My message to these comrades has been that these are phases we must go through in a struggle as big and as serious as this. We are dealing with a desperate regime which is always on the lookout for who to compromise. Therefore, the most important thing is to pick lessons. These lessons are indeed invaluable as we prepare for the final onslaught come 2021.

I have invited the #PeoplePower leadership for a meeting at which we shall assess this election and decide how to move forward. The good news is that dictators throughout history have done such things in an even smarter way than Museveni- but ultimately they fell and were dropped in the dustbin of history. The most important thing for us is to be smarter and more organized than the dictatorship. I am persuaded beyond doubt that we shall soon overcome.