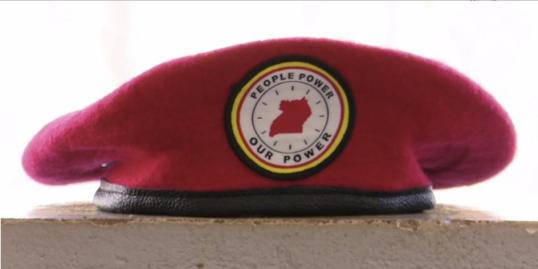 The people power movement led by the Kyadondo East MP Robert Kyagulanyi aka Bobi Wine have defiantly vowed to continue donning the Red Beret. The Red Beret has been gazetted by the government as a military attire of the Uganda People’s defence forces(UPDF).

According to the gazette, the public is now informed that the marks accessories, are property of the state or classified stores and anyone found in unlawful possession, selling or dealing in them shall be prosecuted under the UPDF Act of 2005.

People Power spokesperson Joel Senyonyi has said that gazetting the red beret as military attire is a sign of panic from the side of government. He added that they will keep wearing the berets because the people power berets do not have a UPDF logo.

People Power activists are famous for donning red attire and red berets symbols of the movement. The NRM also copied them and instead made yellow berets. Many NRM fanatics are seen wearing the yellow berets, complete with the NRM logo.