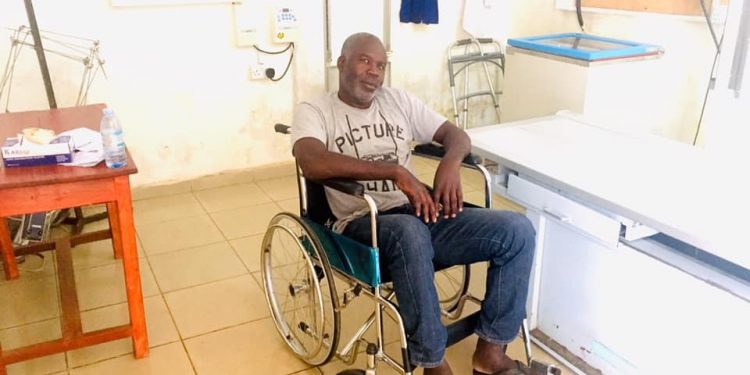 James Akena, a Photojournalist with Reuters, who was clobbered by security operatves while covering protests against the arrest of Kyadondo East legislator Robert Kyagulanyi Ssentamu alias Bobi Wine, is now fully confined to the wheelchair due to the damages.

“Finally, their brutality last August lands me in a wheelchair,” he captioned the pictures of him in a health facility being wheeled.

Last year during the Bobi wine protests, Akena was captured on camera being battered by security personnel dressed up in UPDF uniform, downtown Kampala on August 20, 2018, while covering city protests.

Videos and Photos of Akena being battered while on his knees created a social media uprising after Government dismissed the Photo’s as fake and then later saying that the soldiers who battered Akena were from West Africa but surprisingly appeared in a UPDF uniform.

After the Public went angry, President Yoweri Museveni said that when he sought an explanation from the army, he was told that Akena had been beaten because the soldiers mistook him to be a camera thief because he couldn’t easily be identified as a journalist.

After all the events, Akena has since sued the government seeking Shs100m in compensations. In his application, Akena says that he was beaten by soldiers on duty as a photojournalist adding that a group of soldiers descended on him while on duty and battered him, took his camera and cash worth Shs3.9m.