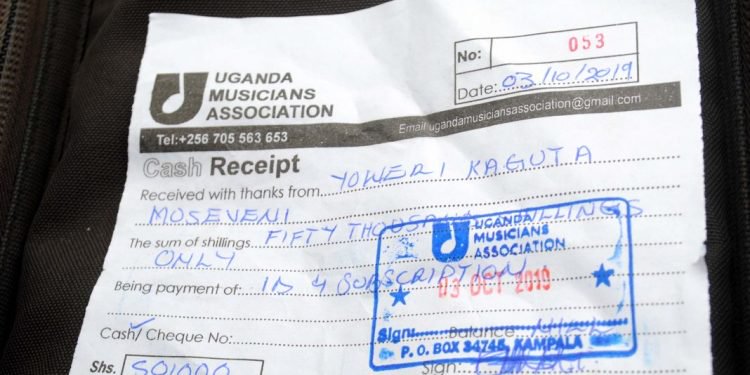 President Museveni has officially registered as a member of the Uganda Musicians Association, making him a fully gazette local musician who can now out compete Bobi wine musically.

According to the Uganda Musician Association receipt that was handed to Balaam Barugahara at Kololo Yesterday, Museveni had paid membership fees worth shs. 50,000 for an Identity Card and Subscription.

With Pressure from the People Power movement, Museveni was compelled to open up a music studio for local artistes to record audio songs for as low as shs. 10.000. And now he has registered as a local musician because he thinks Bobi wine gains his Political capital in music.

Famous for his “Another rap single” Museveni is apparently expected to launch an album which will feature songs that he is currently recording ahead of 2021.

According to sources close to the President, the album launch is scheduled towards the end of next year and the songs will be used as campaign tools to secure the 2021 Elections.

According to the Uganda Musicians Association, Museveni’s registration into the association is a good boost for their capital.