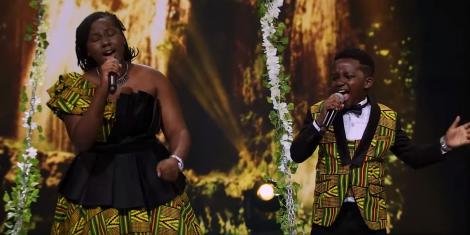 Ugandan singing youngsters, siblings Esther and Ezekiel Mutesasira have won the first edition of East Africa’s Got Talent show. The duo was announced after a stimulating televised show finale at Catholic University auditorium in Nairobi, Kenya on Sunday. They walked home with a US$50,000 (sh184m) grand prize.

The finale was the climax of the six-month journey that saw numerous contestants from across the region. Rwanda’s Intayoberana took second place. The Mutesasiras are the children of Ugandan gospel musician Julie Mutesasira.

East Africa’s Got Talent (often abbreviated as EAGT) is a talent show competition that is part of the Got Talent franchise owned by Simon Cowell. Season one was produced by South African film production company Rapid Blue, and was broadcast simultaneously across four countries in East Africa; Kenya, Tanzania, Uganda and Rwanda.
Spread the love