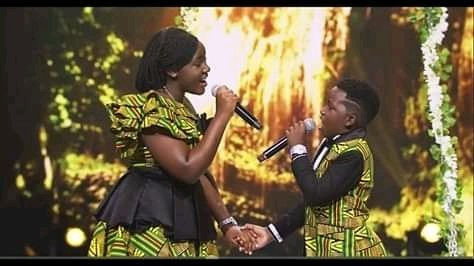 We all know Bobi wine’s story from the Ghetto slams of Kamyokya, where he has grown from grass to grace, no one to someone, from zero to hero from, he has moved from nowhere to somewhere to parliament and now to eyeing the country’s top job is one to consider.

His story has inspired many youths to believe in themselves, be determined and prove to everyone that everything is possible. This is the same message he has been preaching in most of his songs like the Situka tutambule, Bikwase Kyagulanyi, even in the latest where he features his comrade Nubian lee dubbed Osobola

As everyone is congratulating the singing duo of Esther and Ezekiel for winning the East Africa Got Talent which was too competitive with equally great talent from across East Africa, one concerned citizen has credited Bobi wine for inspiring the Ghetto youth with a fact that even the winners hail from the Ghetto of Kamwokya.

I find it in order to thank you @HEBobiwine for living a life that has boosted confidence among the ghetto yutt. Ezekiel & Esther reign from the Kamwokya ghetto, one Ghetto you’ve promoted your entire music career and have made it stylish to belong.

YOU WILL BE 10TH PRESIDENT pic.twitter.com/E8QMrvAnhW

One ardent fan tweeted in total appreciation of the lion from Magere.