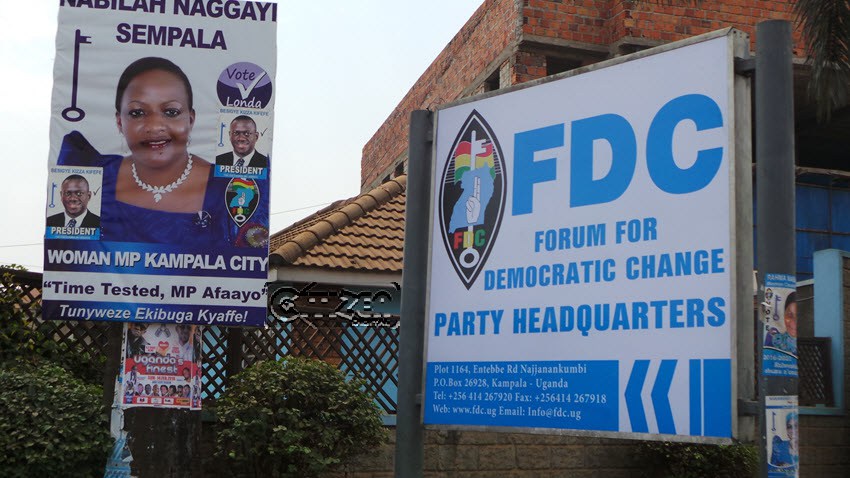 In commemoration of our nation’s 57th Independence Anniversary this Wednesday, October 9th, the Forum for Democratic Change (FDC) has organized a public lecture at our headquarters. The Peoples President Rt. Col. Dr. Kizza Besigye, FDC President Eng. Hon. Patrick Amuriat and other leaders will attend and speak at this event.

What should have been a national function to commemorate our Independence has been turned into a Yoweri Museveni and NRM day, hence the need for a true national function.
Independence is not about the passage of time. It is about what we have collectively achieved as a people. Our grandparents who resisted colonialism, fought for economic emancipation and self-rule. They wanted to gin their cotton. They wanted to be free people. They wanted equal representation.

At 57, the only achievement that is still subsisting is having a black man at Entebbe State House. This black man is by far worse than Andrew Cohen who was the British Governor at the time of our Independence.
Cohen allowed Ignatius Kangave Musaazi, Abubakar Kakyama Mayanja, Stefano Abwangoto, Ben Okwerede, Yekosofati and S.B Katembo who formed the first political party in Uganda called Uganda National Congress to freely address political rallies.

Today, you need a permit which is not also granted. We are being ruled at gunpoint by the most corrupt leader and group in our history. Our people have deliberately been impoverished. And the leader is lining them up to receive handouts wherever and whenever he visits.

Abu-Mayanja became a Secretary-General of the first national political party when still a student at Makerere. This is a call, especially to young people. This is your time and time is now. The Mayanja-Musazi slogan was Independence Now. Let us demand CHANGE NOW. You the 70% of the population that Museveni calls bystanders in the economy because you have nothing.

INVOLVEMENT OF MILITARY IN POLITICS

Last week the FDC sufficiently addressed the issue of military involvement in politics. Of course not something new, but because of the great danger it poses, we will repeatedly raise.

The Constitution is very clear in chapter 12 on Defence and Security. Article 208 is very clear. “The Uganda People’s Defence Forces shall be nonpartisan, national in character, patriotic, professional, disciplined, productive and subordinate to the civilian authority as established under this Constitution.”

It is UPDF that Museveni used especially to cheat elections in the just concluded Hoima District Woman MP by-election. We addressed this matter last week.

We once again would like to caution the CDF Gen. David Muhoozi and all the army leadership to resist Museveni’s invitation to participate in partisan politics. There will be a day for each one of you to account when 75-year-old Museveni has long gone. Uganda will not end with Museveni and you will not follow him to his grave. Follow the Constitution and you will be remembered, the way we are now remembering Musaazi and Abu Mayanja.

NONE PAYMENT OF ALLOWANCES TO SOLDIERS SERVING IN SOMALIA

Our soldiers deployed in Somalia to protect a 12-year week government, have not paid all their allowances for several months.

A group of 530 soldiers under an operation name UNGU deployed in Somalia for 12 months between July 2018 and July 2019, were paid for only five months. They did not receive payment for seven months yet UN and AU paid all the money.

Another contingent of 1830 soldiers under the name UGABAG 25 deployed during the same period have also not been paid their full allowance. And so is another group UGABAG 24 deployed between Feb. 2018 and Feb. 2019.

Mr Museveni and his commanders, who claim to love these soldiers more than their relatives, should explain what happened to their allowances. And to our soldiers please know that Museveni is simply using you for his selfish interest.

The FDC mobilization in the Central region began last week with a meeting of party leaders in Kira Municipality, Wakiso district. Today, a preparatory meeting to roll out the programme to the whole of Wakiso and Kampala has been called at the party headquarters.

This follows mobilization in the North and Eastern Uganda. All the FDC leaders in Buganda are hereby informed to begin preparations to receive the People’s President, Party President and other senior leaders.
A detailed programme will be issued in due course.