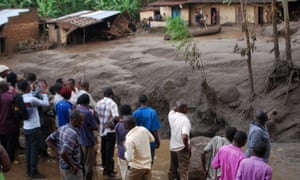 Hundreds of Ugandans living on the slopes of mountain Elgon in the far district of Bulambuli have been hit by another storm of mudslides that have displaced them and destroyed property, food and life held at risk.

For the past 10 years since 2009, the area has had a spate of landslides that have left many displaced, dead with property worth millions lost while government ministries in charge of disasters keep making fat budgets.

This comes at the back drop of various warnings from the metrological department two months ago highlighting heavy down pour in many different parts of the country and so far Bulambuli is feeling the pinch but have no other option apart from staying in their homes.

According to LC 11 chairperson of Bunangaka parish whose house was washed away says most of the flood victims are now occupying Bunangaka primary school while others are being hosted by their neighbors who haven’t been affected.