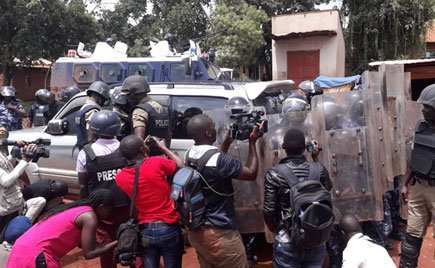 The Uganda communications commission yesterday unleashed a 273 paged investigation report castigating 13 media houses over what was termed as bleach of minimum standards during the live coverage of the brutal arrest of people power boss Robert Kyagulanyi Ssentamu.

Some have since been tasked to defend themselves on why their licenses should not be revoked following the licence revocation threats. In may this year UCC came under fire for ordering media houses to to suspend producers, heads of news, and heads of programs.

The stations are; NTV, NBS TV, BBS TV, Bukedde TV, Kingdom TV and Salt TV. Others are; Akaboozi FM, Beat FM, Capital FM, CBS FM, Pearl Fm, Sapientia FM and Radio Simba were to suspend 39 staff for bleach of minimum standards however the latter vowed to defy the directive citing its illegality and this led to a legal battle that trashed the directive.

However the legislator has blasted the media regulatory and licencing body for acting political on the tunes of the regime hence threatening the independence of the media and freedom of expression.

For carrying a live coverage of police brutality against me and our supporters in April, Ugandan media houses NTV, NBS, BBS, Bukedde TV and Radio Sapientia have been threatened with revocation of their licenses. Usual script for all despots. Eventually, they fall. Aluta continua pic.twitter.com/IvHrw9jW5h