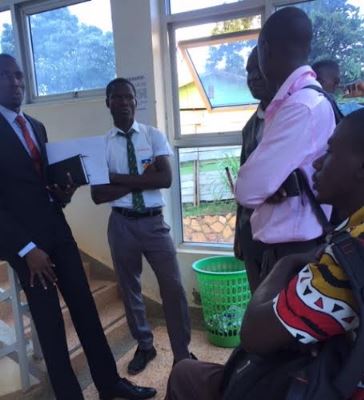 However, Eronda together with his father Mr Wilberforce Eronda Wandera last week sued the school’s Board of Governors claiming that the circumstances under which he was expelled were not clear. They sought for the indulgence of the court to stop the school from unfairly treating the student who in their view had not been punished by following due process.

The student’s lawyer Walter Bwire said that Eronda signed the school rules and regulations upon admission into the school which included the procedure of being expelled or suspended from the school which he says was not followed in this case.

Mr Bwire said: “My client signed the school rules and regulations after while getting admitted in Namilyango college which include the procedure of being expelled or suspended from the school.”

According to the school rules, a student must be subjected to the student’s disciplinary committee depending on the nature of the case. If it’s beyond them it is pushed to the teacher’s disciplinary committee, if it’s beyond them too then it is pushed to the headteacher who is supposed to appeal to the board of governors which Eronda said did not happen and instead the headteacher made the decision without following the proper procedures.

in his case, Eronda says that he faced the teachers’ committee in the staff room who decided his fate.

“I faced the teachers’ committee and no witnesses were brought to support my case during the entire session. My fate was then decided that I have been excluded from school and was pending the decision of the Board of Governors who have never called me till now to listen to my case,” he said.

However, he was excited when the court ruled in his favour to do the exams from the prestigious school.

Speaking to Mr Kenneth Engoru, the School lawyer, said that they will follow the court’s decision.

“We shall respect the court orders and see what happens.”

Today, academic institutions are increasingly being subjected to legal suits from aggrieved students and learners which has helped to keep them in check.