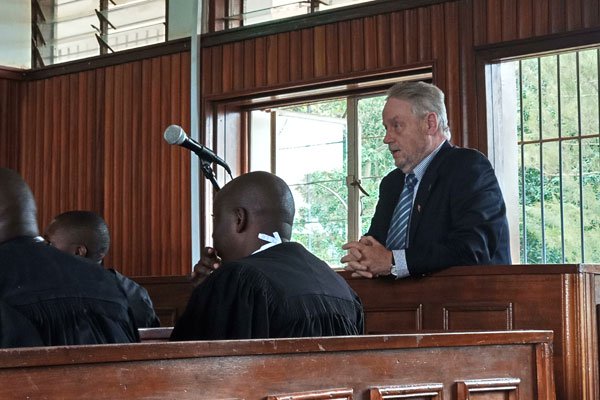 The hearing of a case in which German national Bernhard Berry Glaser is being accused over sexually abusing minors starts today at the Masaka High Court.

Bery Glaser who is the Director of Ssese Humanitarian Service, an NGO located in Mwena landing site in Kalangala district is facing eight charges of aggravated defilement and 19 counts of aggravated child trafficking.

It’s alleged that in 2007 and in November 2013 at Mwena Landing site in Kalangala district Glaser abused the power and authority he had over the minors that were under his care and sexually assaulted them.

The German national first appeared before Justice Nabisinde on 23rd August who ordered that Glaser be taken through a weeklong trial but his Lawyers led by Caleb Alaka objected arguing that their client sick and needed immediate attention.

Last month Justice Nabisinde ruled that Glaser was medically fit to stand trial after having received medical reports indicating that the accused was not seriously ill.

Mr. Glaser with guidance from his lawyers refused to take plea on grounds that he was only comfortable speaking Flemish, a Belgian dialect and unfortunately he didn’t have an interpreter.

Glaser was arrested in December 2013 on suspicion of sexually abusing over 19 minors under his care in Kalangala, he was later acquitted by court after the state failed to get incriminating evidence against him.

Early this year, Police detectives raided Glaser’s home in Kalangala rescuing over 11 children who had been living under his care and there was suspected sexual abuse.