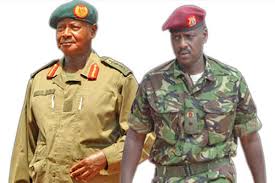 Yesterday media was a wash of stories of first son General Muhoozi Keinerugaba thretenning to crush anyone who disturbs Uganda’s peace to dust. Many wowed him for being patriotic while others saw it in a different angle of why the first son has started being active on matters regarding Uganda.

After winning credit for threatening Uganda’s enemies, Museveni’s only son has once again come out and named his father as one of the five best nationalists Africa has ever had. He also points out that the UPDF soldiers fear him.

These are the greatest African nationalists ever! Mzee Museveni is without a doubt in the top 5 Africans ever made. All of us soldiers in UPDF love him so much! Mzee is our hero! pic.twitter.com/gfW7ow79wr

This rises many questions whether the Muhoozi project that has been a secret from the media if it’s coming to life after many years of suspicions. It’s been a hidden talk for long that president Museveni is preparing his son to replace him for the country’s top job.