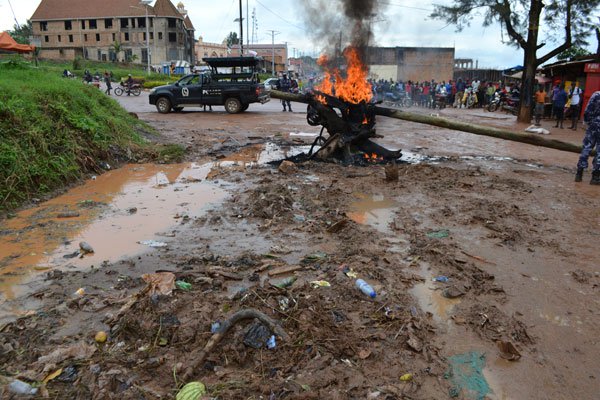 Masaka city was on Monday awash with tear gas and live bullets which Police used to suppress angry vendors at Masaka Central Market who had staged a demonstration over the poor state of roads adjacent to the market and the bad drainage systems that has left sewage flowing through the market.

The Angry vendors noted that Bwala Hill road whose drainage channel got blocked, pours runoff directly into their stalls thus destroying their merchandise and they are at risk of a cholera outbreak.

As a way of expressing their disappointment, the vendors decided to block the road paralyzing traffic for close to an hour which prompted riot police to fire teargas and live bullets to disperse the vendors.

The Vendors noted that the situation is unbearable and they have complained enough to the municipal authorities to repair the drainage channel without response yet as business men and women they making losses and their health is at stake.

In support of the Protests, the LC III Chairperson Katwe Butego, Mr. Denis Lukanga Majwala noted that the Vendors were right to protest because the Local leaders complain to the authorities but all in vain adding that Bwala Hill road is under Uganda National Roads Authority (UNRA) but they have failed to work on it despite numerous reminders, maybe after this demonstration, they will wake up and fix it.

According to Mr. Paul Kangave, Southern Region Police spokesperson, Police intervened only to restore order and clear the road for traffic to flow normally.

“Since the market is close to Masaka Town, the protestors would easily cause mayhem in the town and we had to swiftly intervene and restore sanity,” he said

The vendors, who are operating in makeshift stalls relocated to the open space adjacent Masaka Secondary School area two years ago to pave way for construction of a modern market at their original site which is about 100 metres away.

The modern market is expected to have working space for more than 2,000 vendors, which is twice the number of those who were initially operating from the space. The vendors had initially rejected the open space where they are operating saying it is small and not convenient for a market but later agreed to improvise as they wait for the Modern market.