The Army at it again with Red Berets 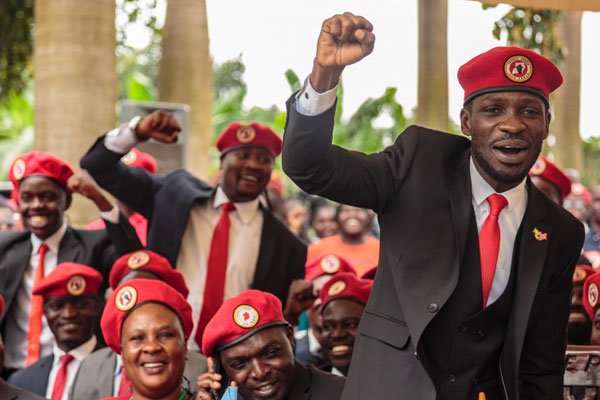 The UPDF Chief Political commissar, Brig. Henry Matsiko has once again reechoed a warning to People Power supporters noting that People Power using the red beret is making the military compete with civilians on which attires to wear and which symbols to use.

“If you are engaging in civil activities and you show signs that you are moving to militancy, it is like moving in an area which is not your own. What I see is the red berets making the military to compete with civilians on which attires to wear, which symbols to use,” Brig Henry Matsiko, the UPDF chief political commissar, said last Friday during release of a human rights defenders’ report tilted ‘Democracy on Trial’.

He added that as the Military, they have seen non-civil activities that went into the military actions, drawing in the army. When you show signs that you are no longer confident of the civil action and you want to go military, then be ready to face those whose mandate is to defend the authority of the people. So anything that threatens people’s authority, it is the role of the UPDF. Anybody who wants to threaten the democratic foundations of Uganda, invites intervention of the UPDF.

However the Vibrant People Power Spokesperson Joel Ssenyonyi asked the Army to stick to their UPDF berets because the People Power berets are not a product of the army rather the army is being used by the Junta.
“We shall keep wearing the berets whenever we want to. The other day, we were at police and we wore them and as I was saying earlier on, we have been anxiously waiting for anyone to be charged with wearing a red beret,” Mr Senyonyi said on the sidelines of the report launch.

Last month, Government published in the national gazette the UPDF uniforms and other wear which included Red berets that the People Power movement have been wearing announcing that anyone found wearing a red beret will be arrested and prosecuted under the UPDF Law.

The ban came two months after People Power launched the attire as one of their campaign brand symbols in preparation for the 2021 general elections.

Famous City Lawyer Ivan Bwowe also took it upon himself to Petition the high court challenging the Red beret ban as criminal.

Meanwhile, the report findings indicated that human rights defenders are struggling to enjoy their freedoms of expression, assembly and association during election periods because some of them are targeted by the State because of the work they do.