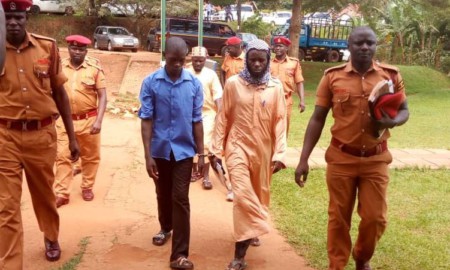 Court based its decision on the submissions of the suspects’ lawyers; Mr Anthony Wameli and Mr Geoffrey Turyamusiima. The duo asked the court to dismiss the cases against their clients arguing that Nabweru Magistrate’s Court lacks jurisdiction to try them of the three offences.

The defence lawyers submitted that since prosecution alleges that the trio committed the offences at Mpondwe border post in Kasese District and Nasser Road in Kampala, they cannot be tried in Nabweru

“Your worship, under the Magistrates Court Act, the Nabweru Court is supposed to try charges from Kawempe and Nabweru divisions and trying the accused in this court amounts to the abuse of court process by the Directorate of Public Prosecution,” Mr Wameli submitted.

The trial magistrate Mr George Mfitundinda conquered with the suspect’s lawyers citing Section 34 of the Magistrate’s Court Act which states that all charges should be tried by the court with jurisdiction. He said the suspects before him committed the offences outside Nabweru.

“I, therefore, dismiss the charges because the offences were not committed from Nabweru. The accused persons are hereby set free unless they are held on other unlawful charges,” he ruled.

The Prosecution had alleged that Shafiq Kasujja while at Nasser Road in March, 2017, unlawfully designed and printed a National Identification Card in the names if Andrew Kwesiga which was later found with Higenyi Noordin Aramathan. It also alleged that, Bruhan Balyejusa alias Masiga at the same time was found unlawfully possessing four National Identification cards that reportedly belonged two of his co-accused and other two were for a one John Bwambale and Richard Toddy.