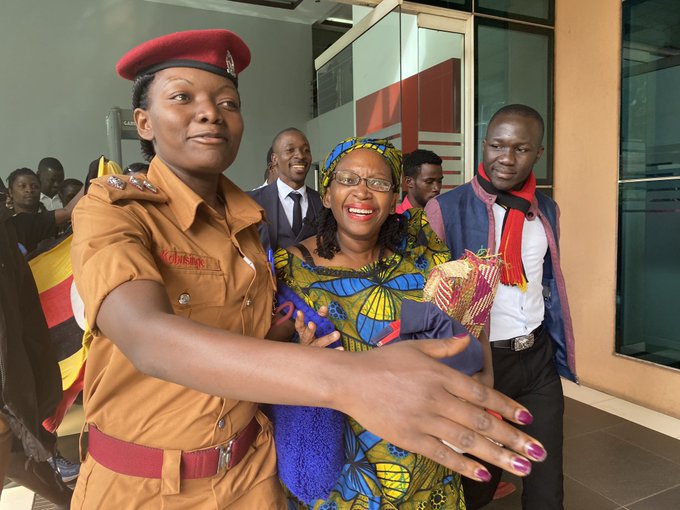 This afternoon, freedom fighter, academician, mother and activist Stella Nyanzi has appeared in Court for what was supposed to be the judgement hearing in her case against wrongful termination by Makerere University.

However, the judgement did not occur as Justice Lydia Mugambe says the University legal team has not availed some paperwork. The ruling has been deferred to 8th November.

Despite the disappointment, the court has been in a jolly mood-lit by friends of Stella Nyanzi who turned up dressed in national colours and colours of the People Power movement. They turned up to show solidarity with Stella Nyanzi.

One of the biggest developments of the day has been the news that this publication has received that Stella Nyanzi is being tortured in Luzira women’s prison on the orders of Deputy OC Victoria Achan.

The notorious Victoria Achan is said to have a personal vendetta against Stella Nyanzi and has made it her business to subject the academician to torturous and humiliating treatment.

It is not clear what the source of her motivation is but this news now puts a face to the long-standing accusations of ill-treatment of Stella Nyanzi at the hands of Prison authorities in Luzira.

Attempts to reach Prisons Spokesperson Frank Baine to comment on these allegations have been futile.

From time to time, Uganda Prisons Service has denied allegations of torture against Stella Nyanzi. In the face of this revelation, we wait to see if Victoria Achan will be brought to book and queried about these allegations!