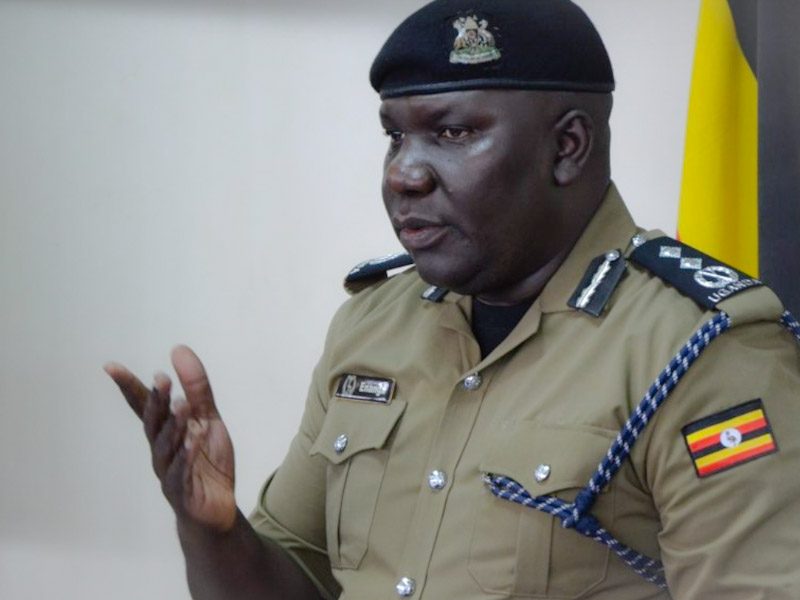 Police Spokesperson Fred Enanga has had a tough day appearing before the Bamugemereirwe Commission of Inquiry into land this afternoon.

The land for which Enanga is being questioned is found at Oreta village in Apac district measuring four-square miles. George Echonga, a retired Superintendent of Police and father to the police spokesperson is accused of grabbing it from their Okabo clan.

Today, the Committee put Enanga to the task to explain allegations of using police to help his dad grab the land that is allegedly owned customarily.

“What is disturbing is that there is a dispute involving family members over the status of the land but your name keeps coming up in your capacity as a police officer and it involves the use of police to force them off,” Ebert Byenkya the Committee Counsel told Enanga.

Quoting the evidence of Fred Orionzi, a 33-year-old surveyor, the commission said Enanga provided a police vehicle that was used by the surveyors who were doing private work for his father.

However, in response, the police spokesperson said the vehicle carried only police officers but noted that they had been requested for officially by his father George Echonga from the District Police Commander for Apac.

“It is true we contracted a private survey company but my father had indicated that following the manner in which our younger grandfather Naphter Enanga was interfering in activities of the land, he had to inform the area DPC to be present during the survey process,” Enanga told the commission.

“It is not true police officers got involved in the surveying of land. Their presence was that in case of any breach of peace, they would help restore it,” he added.

The commission accused the police mouthpiece of using police to disrupt a clan meeting meant to discuss issues surrounding the contentious land but in response, Enanga insisted that these were mere allegations that were baseless, before referring to them a report from the Police Professional Standards Unit that cleared him of any wrongdoing.

PSU commanded by Assistant Commissioner of Police, William Okalany was last year ordered by the Inspector General of Police Martin Ochola to investigate Enanga on threatening to evict people on the contentious land and using government facilities for his own private business.

According to the report, a copy of which Enanga gave to the commission, PSU found out that the police spokesperson was not involved in evicting people from the land as had been alleged.

“There is no direct involvement of CP Fred Enanga to actively evict people from the land under dispute but the occupants assumed that he might be in support of his father’s attempts to evict them which has not been substantiated by any tangible facts,” read in part the report by the PSU commandant to the IGP and the same was handed over to the land commission.

Enanga further told the commission that no one in the police force is above the law, adding that had he been found culpable, he would have been punished by the force.

“Police is not different from other institutions as no one is above the law. You can see a number of senior officers have been dragged before the law. No officer will take wrong orders from superiors or else they risk facing repercussions,” Enanga said.

He also dismissed allegations that he ordered police to arrest their clan head and other people who had come for a meeting to resolve the issue of the contentious land.

“The best way to verify what I am is carrying out thorough investigations. Police are available and so is the clan head.”

The commission also quizzed the police spokesperson on the registered company under the names of Awillo Dyang and incorporated in 2003 that Enanga and his father have a share each in the company that owns the land is contentious.

The commission put it to Enanga that the company is foreign-owned and asked him to explain how it got a freehold title when it is not locally owned which is contrary to the Land Act. In response, Enanga said their lawyer will follow up on the matter.

The commission of inquiry into land matters also asked Enanga and his father to find an amicable solution to the existing conflict, to which the police spokesperson agreed.