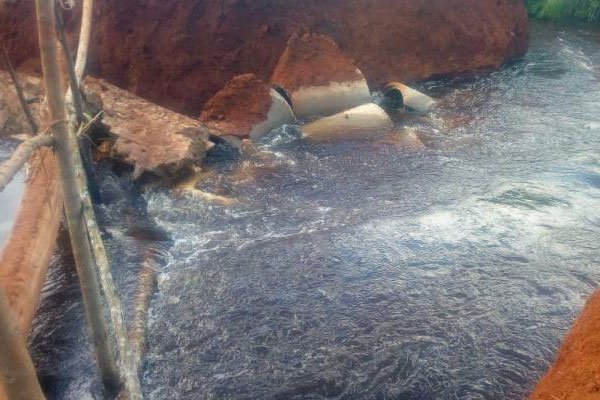 Heavy rains have destroyed a new bridge in Kyenjojo district which was commissioned two months ago.

The Bridge which cost about 95m is a crossing link between the sub-counties of Katooke and Kyarusozi across the Aswa swamp.

Reports from the residents indicate that the bridge started collapsing on Saturday and was completely down by Tuesday when all its culverts were washed away by running water.

The Bridge that had become a major route connecting the two sub-counties is now no more since Residents have to use other routes like Kyenjojo –Rugombe – Kyarusozi which are expensive and time-consuming.

Farmers are now grounded because they cannot access the farms or even transport their agricultural produce to the markets because of the poor road network.

The Collapse of the 95m Bridge is a result of shoddy work, considering the small size of the culverts and the fact that soil was used to seal the road instead of concrete and now travelers have to spend over shs. 20,000 to reach Katooke Sub-county.

According to Mr. William Kaija, the Kyenjojo District Chairperson the destruction of the Bridge was not shocking because he acknowledged the use of small culverts and soil instead of Concrete due to financial constraints.

“It was under construction, and we did not have the big culverts that we needed, we only had Shs95m which was less for the standard we would have desired,” he said.