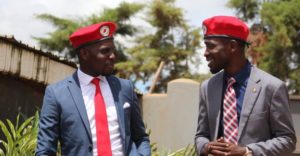 The BBC world service today published a story of an interview where Museveni was highlighting on why Police has continuously blocked his concerts across the country claiming that Bobi Wine is an enemy of progress in Uganda.

“Bobi Wine went to America and said that people should not come to invest in Uganda. That means he’s an enemy of progress in Uganda. When you and tell foreigners that they should not come and invest in our country, you are waging war on prosperity. So why then do you want to come and take advantage of that prosperity?”- reads part of Museveni’s statement.

However, the People power spokesperson Joel Ssenyonyi has this evening poured cold water on Museveni’s allegations calling them baseless and just mere propaganda in the statement below.

“The allegation by our Outgoing President, Mr. Yoweri Kaguta Museveni that the People Power leader Hon Robert Kyagulanyi told Americans not to invest in Uganda is not only ridiculous, but also littered with falsehoods. I think Mr. Museveni must have seen that in one of his dreams about Hon Kyagulanyi (Bobi Wine) since he spends nights thinking and dreaming about Bobi Wine!

Hon Kyagulanyi in an interview with Aljazeera on 11th September 2018 cautioned Americans about the military aid they give to Uganda, since it’s not being used to protect Ugandans, but to torture, brutalise and even kill Ugandans who are opposed to Mr. Museveni’s 34 year rule.

By the way, it’s deliberate for Mr. Museveni to impoverish Ugandans, that’s why for example he killed co-operatives. Poor and disempowered people are easy to rule over, they don’t challenge you, and they are easy to dissuade with things like soap and sugar. Mr. Museveni, please carry your cross of mismanaging our country, stop passing the blame.” Reads Ssenyonyi’s Statement.