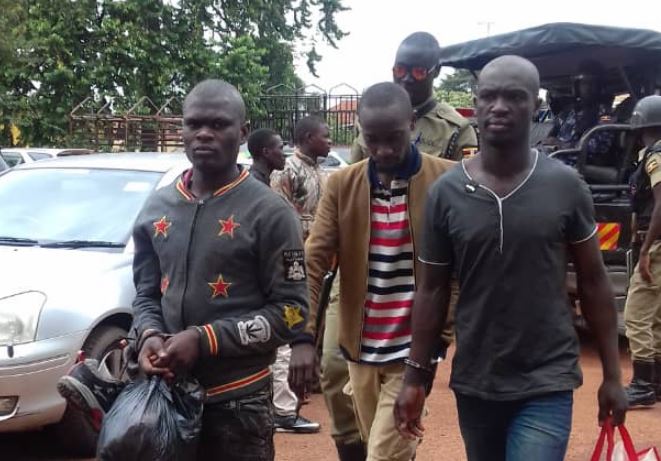 Three more suspects have been arraigned before Mwanga 11 court and remanded to Luzira prison over the suspected kidnap and murder of social worker Maria Nagirinya and her driver Ronald Kitayimbwa.

On Friday 18, the prosecution led by Safina Bireke has tendered before the court an amended charge sheet to include; Sharif Mpanga, Sadat Kateregga and Raymond Okori.

The trio has now joined 4 others including; Coporiyamu Kasolo alias Arsenal, Johnson Lubega alias Etoo Rasta Manonmano, Nasif Kalyango alias Muwonge, and Hassan Kisekka who were charged on September 23 and remanded at Luzira prison. All the 7 suspects are facing 6 counts including 2 murders, 2 aggravated robberies and 2 kidnaps with intent to murder Nagirinya and Kitayimbwa.

However, they have not been allowed to plead since they are charged with capital offences only tried by High Court consequently the trial magistrate Esther Nyadoi has sent the three suspects on remand till the October 25 as police inquiries continue. On that day, the suspects will not be brought to court physically as the mention if their case will be done via a video-conference.

The prosecution alleges that on August 28, 2019, the accused kidnapped Nagirinya and Kitayimbwa and later murdered them.

They also face an alternative count of aggravated robbery. The suspects are also said to have used violence to rob Nagirinya of her motor vehicle, mobile phone and cash amounting to 260, 000 shillings and also proceeded tp rob Kitayimbwa of his mobile phone and his money-24000 shillings.

Nagirinya and Kitayimbwa’s bodies were recovered from Nakitutuli village in Mukono district.  Later on, the suspects were arrested as they attempted to withdraw monies from Nagirinya’s mobile phone.