The Red pepper is officially an NRM/Museveni propagandist machine 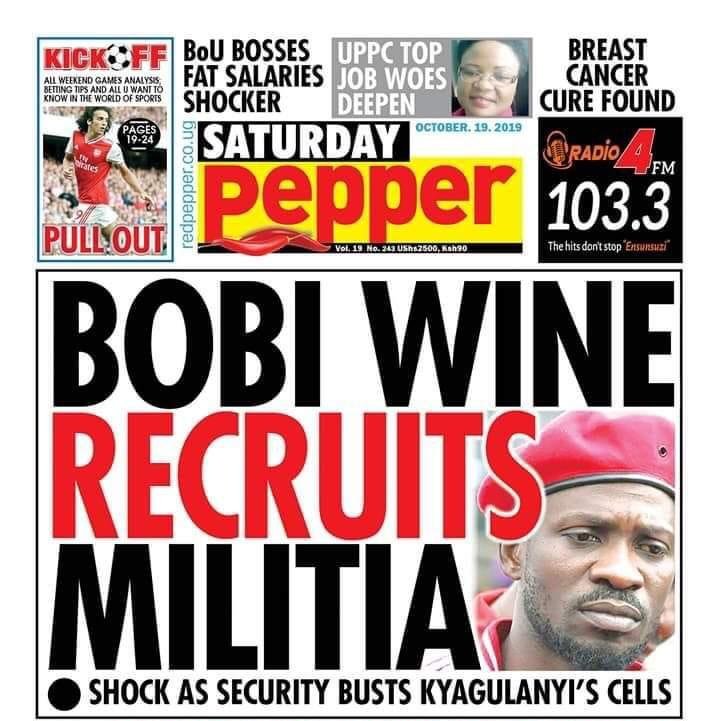 Although this headline and news being touted by a tabloid-like Red Pepper is not news, it is, however, an indication of the thinking by regime apologists and probably a revelation of their plans.

For the record, this is not the first time the state would be trying to pin “militia” allegations on Hon. Robert Kyagulanyi Ssentamu. We all remember so well those guns and bullets lined up in Arua at the wake of the arrest of Bobi Wine and cold blood murder of his driver Yassin Nyanzi. Uganda Police is yet to tell us what happened to that planted “evidence”

What is surprising however is the continued insistence by Museveni’s regime to pin a militia image on Robert Kyagulanyi Ssentamu who has consistently declared his non-violent approach to politics. If anything, this speaks much to Museveni and NRM’s political ideology. The regime has been so used to comical opposition that in the face of a real challenge, it is panicking and devising erratic solutions.

As expected, Hon Robert Kyagulanyi Ssentamu came out to distance himself from such claims about building a militia.

According to sources within their ranks, the panicky regime plans to stage-manage arrests of some 'operatives' putting on red berets in crime so they declare #PeoplePower a terrorist organisation and ban it! Explains such headlines. We are a non-violent movement! We are watching pic.twitter.com/WXtEf6HFx3

What Hon Kyagulanyi says is consistent with recent government action such as gazetting official military uniform and attempting to classify the People Power beret as a military preserve.

My focus however here is the reaction by well known NRM supporter and Museveni admirer Otim Rugyendo of the Red Pepper. He was quick to read into Bobi Wine’s tweet as an attack on his person and that of his Red Pepper establishment.

You shock me my brother @HEBobiwine with this hopeless accusation! Just like when your fans attacked me for no good reason and you supported them. Walk to @RedPepperUG and write back, like you used to, Dem days! R'memba DAT! Stop inciting your caravan against @RedPepperUG https://t.co/GPk6Mmsko4

What is surprising is that Bobi Wine at no point mentions Rugyendo’s name. However, as the saying goes, the guilty run even when no one is chasing them!

From his reaction, it is not far-fetched to imagine that Rugyendo probably authored such propaganda and therefore was quick to go on the offensive even when no one was attacking him. It is as if he is calling for attention and showing his bosses that he is working and “dealing” with Bobi Wine.

Right from the time Rugyendo and other Red Pepper directors were put into Luzira for slandering the NRM government, they have since emerged born-again and true followers of the NRM. Perhaps it says much about what transpired in the meeting they had with the president after their woes.

It is not like many people have taken the Red Pepper seriously before anyway. We have known it as a tabloid that became popular for news that would make Father Lokodo flinch. Their current tendency towards regime massaging is something we all foresaw.