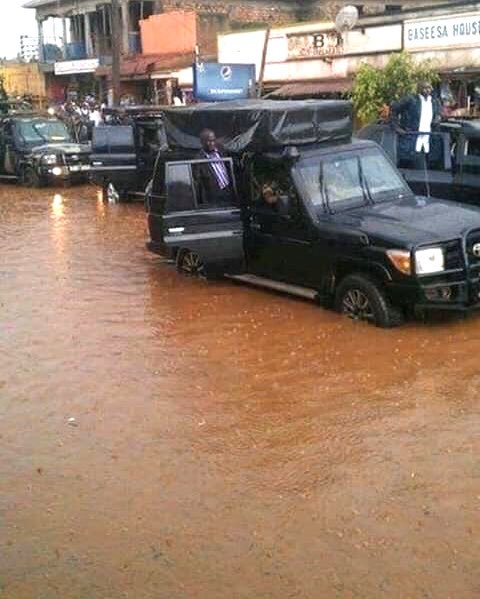 With the heavy rains that continue to fall in recent weeks, the country has been exposed to a wave of floods which have exposed poor infrastructure. Poorly drained roads and other conduits of transport have in recent days been washed away by masses of flowing water.

Yesterday, a picture of the Presidential motorcade stuck in flooded water was circulating on social media. The mean-looking security operatives and escorts of Kaguta Museveni were stuck and watched as industrious common folk riding on boda bodas and others on shoulder-back.

In fact, opposition member and FDC President Emeritus Kizza Besigye Kifefe tweeted about the plight of the President’s men.

Bodabodas seem to fare better than a “Presidential Convoy” in Kampala’s perennially flooded streets during the rainy season!

Colour of water shows amount of soil that’s been eroded to silt waterways &reservoirs. After 34 yrs NRM/M7 Junta, let’s save our Pearl.#2019YearOfAction pic.twitter.com/XxrIb7rlnt

Besigye seemed to make fun of Yoweri Museveni and his NRM for failing to handle issues of the state to such an extent that public infrastructure is eroded.

In an attempt to downplay the plight of the regime, Red Pepper’s Otim Rugyendo who we stated yesterday was a hired PR errand boy of Yoweri Museveni and the NRM tweeted this morning about floods in the US in such a way as to suggest that what we are facing is normal because it is also in the US.

Breaking: #KampalaFloods have migrated to #OhioState in the USA. @NRMOnline should be put to task to explain this cargo export! @PatriciaMagara what do you have to say about this? pic.twitter.com/9lFY3Zkmf7

Well, that is Uganda for you!