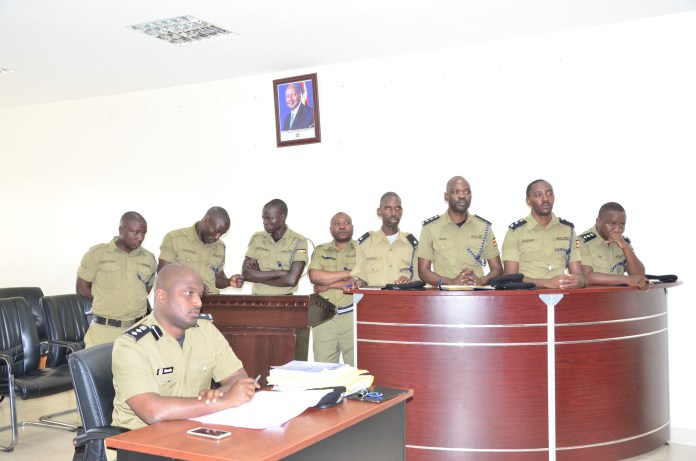 The Police Disciplinary Standby Court at Police Headquarters has charged 8 officers for Professional Misconduct following an internal misconduct investigation by the Professional Standards Unit which also recommended that the officers undergo a disciplinary process.

It is alleged that the Officers neglected to promptly and diligently attend to their duty, as on the 28/08/2019 and 29/08/2019 in KMP South, when they failed to immediately respond to a report of a kidnap, which affected the eventual response towards the victims, Maria Nagirinya and Ronald Kitayimbwa.

The eighth Office identified as D/CPL Kibikwamu Reuben pleaded not guilty to the charge of Discreditable or Irregular Conduct C/s 44(1), Code 12 of the Police Act, Cap 303.

It is alleged that he acted in a manner likely to bring discredit to the reputation of the Uganda Police Force and cause injury to public service, when on the 28/08/2019 and 29/08/2019, at Nateete Police Station, he failed to professionally attend to the relatives of Maria Nagirinya and Ronald Kitayimbwa, who had sought his assistance.

All the 8 appearing before the police Headquarters Disciplinary Standby Court on the 21/10/2019 pleaded not guilty, and Court has to either prove or disprove the allegations against them.

The Police Spokesperson Fred Enanga noted that this case demonstrates how the force is well prepared to robustly address all issues of Professional Misconduct, to uphold the highest standards of policing.