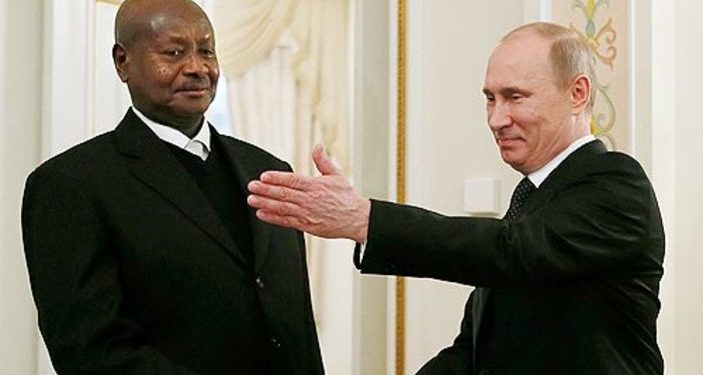 On Tuesday, President Yoweri Museveni left for Russia to attend the Russia-Africa Summit.

I have departed for Russia to attend the Russia–Africa Summit.
The Summit will focus attention on actual and potential relations between Russia and the nations of Africa, in the political, economic, humanitarian, and cultural fields among others. pic.twitter.com/HdaPLz9bvj

Museveni joins dozens of African officials and business leaders who will gather in Sochi, Russia, this week for a two-day summit designed to bolster relations between the Russian Federation and all 54 African nations.

Russia may also hope to fill a perceived void left by the United States, whose presence in Africa appears to be waning.

Museveni, in particular, is worried about the US government apparent cooperation with opposition forces and particularly the People Power movement. Just this week, Museveni branded Hon Kyagulanyi Ssentamu an enemy of Uganda for purportedly discouraging investors from the US from coming to Uganda.

Each day, Museveni feels that his US allies are distancing themselves from him and his government. This has been made worse by recent sanctions on former Inspector General of Police Kale Kayihura and his immediate family. Such action by the US government sent a certain signal to Museveni and his NRM that the US was adjusting its strategy in Uganda that has been its strategic partner in the Great Lakes region.

However, experts like Judd Devermont, director of the Africa program at the Center for Strategic and International Studies, say it’s problematic to conclude Russia can compete with countries like the U.S. and China, despite recent trends suggesting a resurgence.

“We have to look at Russia’s influence and engagement quite separately from the U.S., Europe and China,” Devermont said. “Russia is a relative minnow compared to these other countries.”

In Sochi, African heads of state, ministers and business leaders from more than half the continent’s countries will join panels to explore potential collaborations with Russian agencies and businesses.

President Yoweri Museveni will serve on a panel examining the security implications of epidemics and disease outbreaks, and Museveni and former Nigerian President Olusegun Obasanjo will join a discussion on doing business in Africa.

Close sources to the President indicate that he intends to use the summit to hold bilateral talks with President Putin to seek for closer cooperation that will see him fill the void left by the waning US government support towards his NRM.