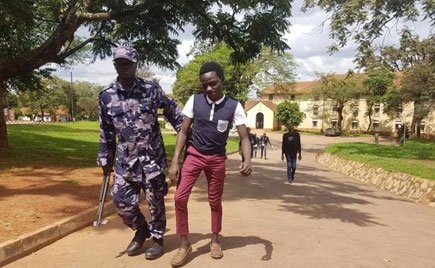 Police and UPDF soldiers have so far arrested 47 students of Makerere University, including the Guild President, as the protest against the 15 per cent tuition fees increment policy entered day three.

Students have since Tuesday been engaged in running battles with soldiers and riot police over 15 per cent cumulative tuition increment approved last year by Makerere University, top governing body, the University council.

However, the vice Guild President Ms Judith Nalukwago who had gone to visit the detained students alongside a team of guild representatives were Thursday blocked from accessing them.

At campus, lectures and other businesses have again been paralysed as protestors forced those attending class to join them. However, the strike which started from Mitchel Hall and College of Agriculture only lasted for less than two hours before it was foiled by the security personnel.

On Tuesday, the university vice-chancellor Prof Barnabas Nawangwe said the protestors were wasting their time because the university council had already approved the policy which will see students admitted for any course pay additional 75 per cent of their tuition in five years.