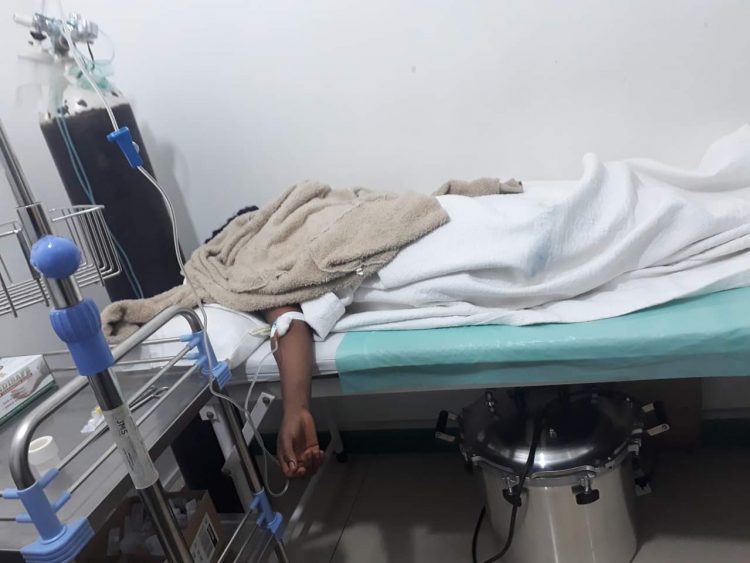 Suspended Female Makerere Student who led the Strike against the 15% Tuition increment identified as Siperia Mollie, the Guild Representative Council (GRC) of school of Psychology has been attacked and beaten up at Complex Hall inside Makerere University by unknown thugs. She was last night found lying unconscious and dumped in Kasubi.

“I have passed by the hospital to check on Siperia Mollie. In my estimation, she’s in a serious but stable condition. Her minders say she hasn’t said a word since they found her. The Doctors say she’s too traumatized to speak. Her friend has informed me that the last message she received from Mollie was an SOS message reporting that a strange person was pursuing her around Complex Hall inside the University. The first person to see her says he found her lying unconscious in Kasubi, around 1hr after she sent the SOS message. I have been told that the matter has been reported to Police. There was a big team of students keeping close watch over Mollie by the time I left.” Saasi, one of her friends revealed.

However, the other University students who were arrested from Makerere and nearby areas during yesterday’s Protest are still in Police detention.

Over 34 students including the Guild President, the Guild Speaker, the Security Minister, and others are detained at Wandegeya Police Station without access to Lawyers.

Lawyers from Kiiza & Mugisha Advocates who attempted to check on them were denied access.