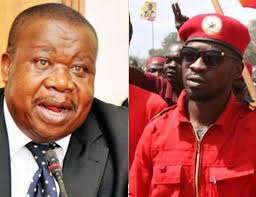 Kyadondo East legislator and People Power patron Robert Kyagulanyi Ssentamu alias Bobi wine has hit back at Justice and constitutional affairs minister Kahinda Otafiire who has for so long been threatening to crash people power using the army.

Last weekend while addressing a meeting in the south-western town of Kashenshero on Tuesday that “People Power” is only vested in local councils (LCs), the newspaper reports.

“I have heard all this noise about People Power; which power do you represent? Where are these people? The one we know is the LCI chairperson, people power is exercised by the LCI chairperson through the ballot box,” Otafiire is quoted as saying.

However Bobi Wine has assured the Motor mouthed General that People power shall prevail no matter the threats.

Says our Minister for Justice and Constitutional Affairs, in total disregard for Article 208(2) of our Constitution which decrees that the army shall be non-partisan, national in character, patriotic, disciplined & subordinate to civilian authority. But #PeoplePower shall prevail pic.twitter.com/ZDco6bGKF2