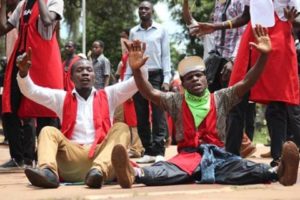 Police has today morning fired teargas to break up an assembly held by Makerere students Wednesday morning at the Freedom Square. Police later arrested Makerere guild president, Julius Kateregga, who had called for the assembly and whisked him off to unknown destination.

In a communication on his Facebook page, Kateregga called upon the gallant Makerereans for a general assembly Wednesday which he said would be attended by the GRC House, the Council of Chairpersons, College Presidents and School Presidents. “Today, the Student Leadership engaged with the University Council. None of our demands was respected,” he said.

VIDEO: Protests against the 15% increment continue in and around Makerere University. Police anti-riot trucks have so far arrived in some places to quell the protests. #NTVNews #Makerere

He went on: “I hereby inform the Students Body of an emergency General Assembly, tomorrow, Wednesday 30th October,2019 at the Freedom Square at 9:00am.” “You are strongly advised to attend in person,” Kateregga went on.