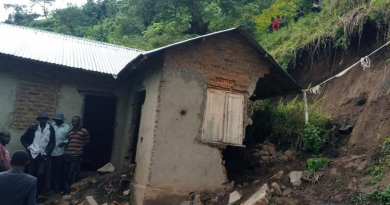 Maureen Kabugho, a seven-year-old who was also in the room was rescued by neighbors and was taken for medication to Kilembe Mines Hospital. All the four children were staying in the same house with their grandparents Theresa Biira and John Tseghe, all of them in their 80s.

Tseghe says that he heard the surviving girl call for rescue and he moved out only for the debris to be too heavy for him to uplift. According to Tseghe, the heavy rains caused the wall on the children’s room to collapse burying all the three children and subsequently causing their instant death.

Modesto Masereka the father to two of the deceased children, who stays in a house a few meters away from affected house, says he heard his father make an alarm and on arrival found the need for machines to uplift the debris.

Masereka says he dashed for a hoe and alerted neighbors who could only save one child since the other children had died. This incident comes just two weeks after two Primary Seven pupils were killed in another landslide in Mahango sub-county in Kasese.

Pascal Kasoke the Bulembia Division chairperson says he is afraid that his area could be hit by famine considering that the heavy rains are also destroying crops. Kasoke appealed to humanitarian agencies to respond and offer relief to families that have lost their houses and also crops.

Rwenzori East Regional Police Commander Samuel Asiimwe advises the people living in mountainous areas to temporarily shift to the lowlands. He says those that don’t have places of aboard in the lowlands can engage their relatives to be hoisted temporarily.

Asiimwe says such fatalities are likely to increase in the mountains as rains continue pouring. He also appealed to the people of Kasese to embrace tree planting as a way to mitigate effects of climatic change. The police boss also asked the people to adopt good farming practices like terracing.

In August, the Uganda National Meteorological Authority-UNMA warned that western Uganda would experience heavy rains from mid-September to December.