I will Thump You To Pulp, Don’t Threaten Me-MP Nandala To Otafiire 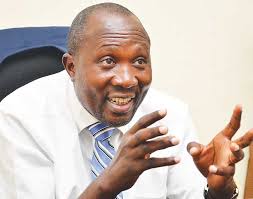 General Kahinda Otafiire on Wednesday faced off with Budadiri west MP and FDC Secretary General Nathan Nandala Mafabi who openly told dared to fist him out if he continues with the threats.

“Even if you want blows, Otafiire we can get out and I show you,” Nathan Nandala Mafabi, the Budadiri County West in Sironko District told Gen. Kahinda Otafiire as his colleagues from the Opposition cheered on.

Gen. Otafiire, the Minister of Justice and Constitutional Affairs had earlier, during a Wednesday afternoon session in Parliament seemed to threaten other legislators after Speaker Rebecca Kadaga had asked him to present documents pertaining the acquisition of Njeru Stock Farm.

The land in question is located in Bukaaya West Village, Buikwe District, Njeru Stock farm is one of the government farms under the National Animal Genetics Resources Centre & Data Bank ((NAGRC & DB).

GEN.OTAFIRE, NANDALA fACE OFF IN PARLIAMENT

“Otafiire is a good friend but when it comes to stealing government property, he is an expert. When he was a minster of Lands, he went and used powers of his office to acquire public land in Kyambogo. So the issue that Otafiire uses his office to grab land is a true story. I will repeat it outside and see what you will do to me. You have used these offices to grab public property”-Said Nandala Mafabi