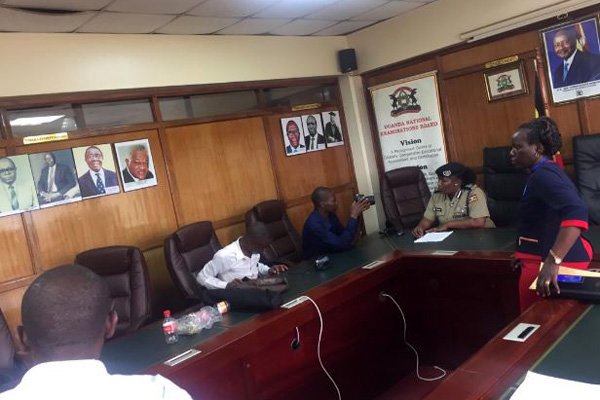 Journalists who were covering a press conference by Uganda National Examination Board (UNEB, refused to cover a speech by the deputy police spokesperson Polly Namaye, who was at the same conference.

The Joint Press Conference by UNEB together with Police represented by Polly Namaye was meant to enlighten the public about the upcoming Primary Leaving Exams. However, journalists declined to pull out their gadgets and cover her speech declaring that they are not contented with the way Police treats them.

All Journalists who were present asked her to return back the message to her superiors about how she had been treated not forgetting that Journalists discontented with the way police handle them while covering different scenes.

They vowed to boycott Police events until there is a mutual understanding. This Protest follows a number of journalists being beaten and tear-gassed by police officers while covering Makerere University strike and are currently nursing wounds.

The Journalists who were beaten included Mr. Alex Esagala, a photojournalist with Daily Monitor, clad in fully branded jacket showing he is a media person, was injured on Sir Apollo Kaggwa Road after police fired two teargas canisters at him.

The Police Violence forced the Press to flee for safety only to reconvene and be ordered by Police Officers wearing Field Force Unit to leave immediately saying that their time was cover to cover events.

Shocking after all the events unfolding, Kampala Metropolitan Police spokesperson Patrick Onyango instead blamed the journalists for being distant from police and getting caught up in the tear gas fire.

“We always advise journalists that in this kind of operation they should move near us because teargas does not discriminate,” Mr. Onyango said.