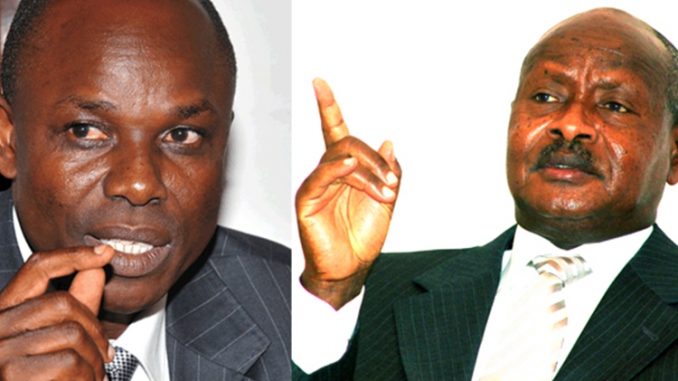 Angry President Museveni has pulled the plug and ordered an inquest into a plan, which was in advanced stages, to pay businessman Hassan Basajjabalaba Shs90b for lost business in a city abattoir deal; he also set up a committee to investigate ministers and technocrats connected with the deal.

The Committee chaired by Gen. Moses Ali was tasked to study the genesis of the controversial payment, the people involved and ascertain whether verification was done before government officials at Kampala Capital City Authority (KCCA), Finance Ministry and Attorney General’s Chambers agreed to compensate Mr Basajjabalaba.

The President “fumed” and demanded to know the people who approved the payment to Basajjabalaba and why the matter was brought to Cabinet at the tail end of the process, sources disclosed that  a junior Finance minister was almost ejected from the Cabinet meeting after he presented the request for Shs90b to pay Mr. Basajjabalaba.

Ekyooto also learnt that after receiving intelligence information that some MPs on the Presidential Affairs Committee were also suspected to be part of the deal, the President, on Tuesday, took the matter to the National Resistance Movement (NRM) Caucus and echoed how he had intercepted a plot hatched by senior ministers and government officials to pay Mr. Basajjabalaba Shs90b through unclear circumstances. He made it clear to MPs that the matter was under investigation.

While Last year several legislators on the Presidential Affairs Committee recommended that Government through KCCA pays off shs. 85b to Basajjabalaba for failure to enable him assume vacant possession of the city abattoir, it is not yet clear how the figures got rounded off to shs.90b.

the Finance ministry permanent secretary and Secretary to the Treasurer, Mr. Keith Muhakanizi, told one of our sources on Friday that he was not under investigation and explained that the new Basajjabalaba compensation budget was approved in his absence.

“I am aware about the payment but I stopped it because Cabinet was going to discuss that issue…you also know that I was out of the county when that budget was done,” Mr Muhakanizi said.

Mr. Basajjabalaba lays claim to the abattoirs on Plot 1 and 3 Old Port Bell Road in Kampala, which he obtained through a lease from the then Kampala City Council (KCC) in March 2000. After the City Abattoir Traders Development Association (Catda) members blocked him from taking over the facility, Mr. Basajjabalaba sub-leased the abattoir to Mr. Daniel Kwantampora, the proprietor of Travellers Coaches Ltd, without KCC’s consent. He briefly run the abattoir before Mr. Basajjabalaba repossessed the facility in 2011, only to be rejected by Catda members.

On June 4, 2001, KCC again sub-leased the abattoir to Basajjabalaba’s company for 49 years at a premium payment of Shs600m, a ground rent of Shs2.7m annually, payable by two equal half-yearly installments in advance on the first day of January, and the first day of July in every year.

Mr. Basajjabalaba is no stranger to controversy related to compensations by the State. Nearly a decade ago, there was an even bigger one when the Shs142b compensation by the government arose from the reversing of the then Kampala City Council decision to sell Nakasero, Shauriyako, St Balikuddembe (Owino) markets and the Constitution Square to Mr Basajjabalaba.

An audit commissioned by the Auditor-General found that the claim by Basajjabalaba was without legal basis and inflated. Instead, the audit released in July 2011 found that the businessman owed the government Shs994m.