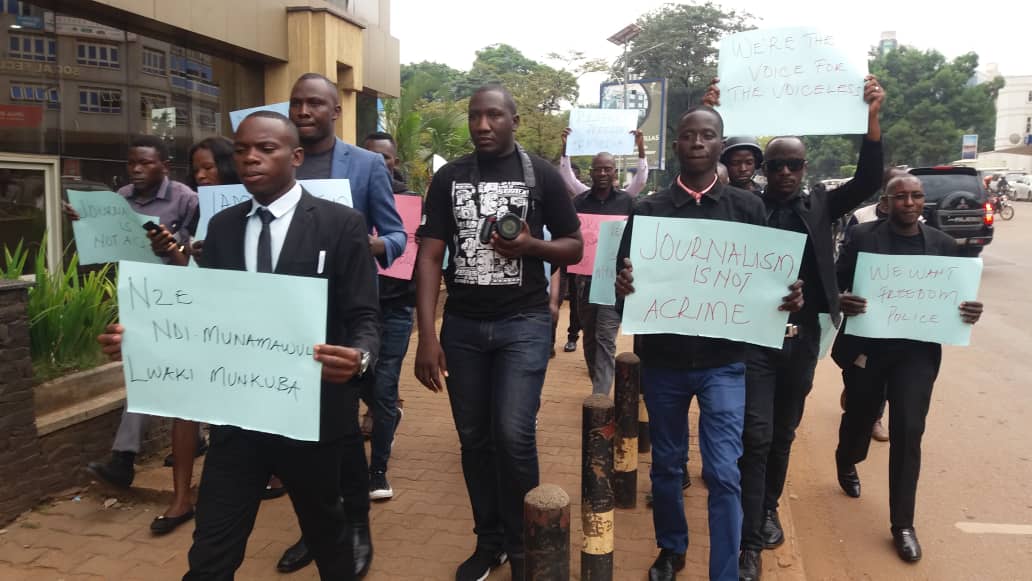 A section of members of the Uganda Journalists Association (UJA) was Monday dispersed by police officers following a peaceful protest to Police headquarters in Naguru where they were set to Petition the leadership of the Police Office.

Several Journalists were then arrested along Jinja Road while marching to the Police headquarters in what Police called an unlawful assembly that was going to disrupt traffic flow.

The detained Journalists were then taken to the Central Police Station on Buganda where they will be charged.

Among the arrested include the Uganda Journalist Association President Hajji Kazibwe Bashir Mbaziira who has on several occasions been arrested for supporting the People Power movement.

Before Police arresting the Journalists, the journalists were peacefully marching to the Naguru Police Headquarters to petition the leadership of the force to stop their officers who are fond of brutalizing media practitioners whenever they are deployed to cover riots and demonstrations following Last week’s events.

Several Journalists were last week assaulted while covering the fees must fall protests at Makerere University leaving many of them hospitalized.

However, Kampala Metropolitan Police spokesperson, Mr. Patrick Onyango last week blamed the journalists for distancing themselves from police officers during riots and get caught up in the ensuing fracas even when they are wearing distinctive clothes clearing indicating that they are journalists.