Ex-Museveni Personal Physician in the spotlight over 2.2 billion 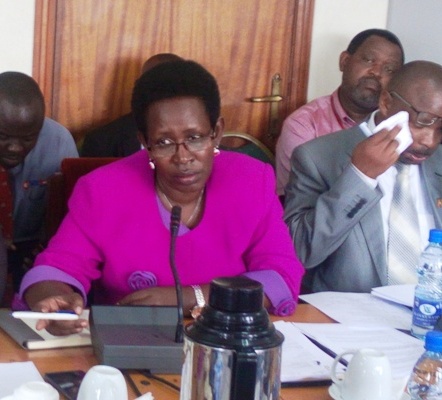 The Ministry of Health Permanent Secretary, Dr. Diana Atwine has cleared the air on allegations of mischarging over shs2.2 billion meant for construction of pediatric surgery wards in regional referral hospitals across the country.

Atwine was on Thursday morning together with the ministry undersecretary Ronald Ssegawa handed over to CID by the Parliamentary Accounts Committee to record statements for flouting the Public Finance Management Act where one is required to seek permission from the Secretary to the Treasury before diverting allocated monies for any other use.

However, in a statement released on Thursday afternoon, Atwine admitted that he appeared before PAC but explained the circumstances under which she was referred to CID for statement recording.

She explained that they saved money from accrued interests and litigation costs adding that when government over commits in agreements and fails to meet its counterpart funding, this puts projects in problems

“This has nothing to do with misuse or embezzlement. What the money has done is there and can be seen. We are proud that despite the financial hardships, the responsible officers worked with what they had to do more. Women and Neonatal hospital, Kayunga, Yumbe and Paediatric Hospital Entebbe are there to be seen,” the statement says.

“There were no funds lost but instead were efficiently utilized as opposed to being left idle.”

Dr. Diane Atwiine was President Museveni’s personal physician before she got tasked to head what was officially known as the Medicine and Health Services Delivery Monitoring Unit, specifically tasked to investigate corruption in Uganda’s Ministry of Health.

In 2016, President Museveni appointed her Permanent secretary Ministry of Health replacing Dr. Asumani Lukwago, who was transferred as Permanent Secretary to the Education.