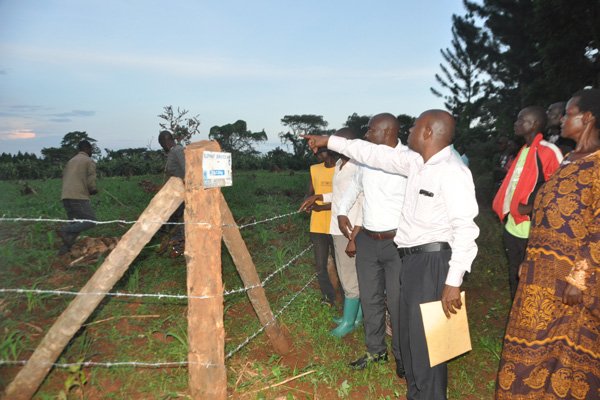 Over 20 families that were evicted from a 15-acre piece of land by a landlord at Bugema Village in Nakaseke District, have been temporarily reinstated by the district authorities citing irregularity in eviction execution.

The Nakaseke deputy Resident District Commissioner (RDC), Mr Africano Arikundira,  who led a district team to the site where a landlord reportedly destroyed more than eight acres of banana and coffee plantations before evicting the affected families and fencing off the land, ordered the destruction of the fence and repossession of the land until the matter is resolved.

The RDC noted that it  was wrong for the landlord to use police to execute a court eviction order yet they clearly know that the execution process calls for thorough scrutiny of the documents and the blessing of the district security committee headed by the office of the RDC adding that they should not bring about anarchy and brew discontent on matters that can be resolved amicably.

He also explained that possession of a court eviction order does not guarantee an automatic eviction of people from land more so in circumstances where tenants have been paying ground rates (busuulu).

One of the affected tenants identified as Mutyaba said that they have been paying ground rates for over 40 years as required by law but the new landlord hired some people to destroy all our crops and fence off the land, leaving families stranded.

Mr. Erone Nsamba, who claims to represent Mr. Richard Kiwanuka, the landlord, told a meeting convened by the deputy RDC that they had acted within the law and that the tenants had been alerted about the eviction in time.

Nsamba also noted that his client Mr. Kiwanuka bought the contested land from Ms. Gladys Nakajigo in 2011. The land belonged to the late Tofiri Kasolo adding that the land was fenced off to ensure that they do not get into problems with people who had planned to encroach on the land.