Man who exposed examination leaks is languishing in Prison day in day out.

When two weeks ago, Hon. Joseph Ssewungu submitted on the floor of parliament, that Minister, Hon John Muyingo is pushing for phasing out teachers with diplomas, some took it for a mere statement of presence, yet in fact, there was a deeper issue.

By default, Minister Muyingo runs a series of schools, which schools are also examination centers and have recently been unearthed as centers of examination malpractices.

Mr. Richard Okello the man that exposed the racket that had leaked examinations to Pupils of Seeta Junior was arrested and has been moving from one detention center to another. 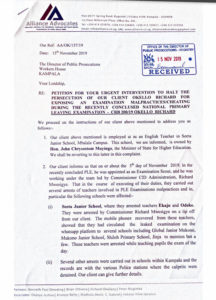 Reports indicate that Muyingo is using his power to protect his empire and destroy the lives of innocent children and of those who want to ensure that children learn the right way.