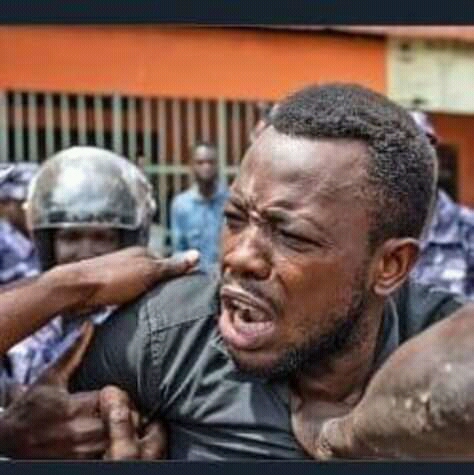 The year 2019 will sink down on Musiri’s memory as one of his worst ever. From losing a father, being suspended from the university and as well limping out of bed on clutches, life has unfolded its worst to the youthful activist. Musiri is the Makerere student activist who appeared in a brutal arrest footage with policemen all ganging up on him instituting severe beatings with the help of gun butts. The student fighter consequently suffered internal bleedings and has since been sickly since his release from police custody.

Musiri has been under medication of his dislocated right arm which suffered a twist from one of the police officers. On top of all this, his backbone has continued to suffer blood clots which has deprived him of his standing stamina. David now needs a helper or clutches to get to his feet. We ably spoke to Kato Jonathan one of his companions who told us the pain the student now undergoes. ”He urinates blood whenever he tries to excrete. David cannot walk on his own, he needs a supporter to be by his side. Sometimes I volunteer to do that,” he says. ”But now exams have started so the schedule may never be the same,” he emotionally adds. Musiri has been undergoing a psychological trauma streaming from his thoughtful days. Family members attribute all their fears on him. Some openly tell him how he is to blame for the deaths of their parents. ”You killed our mother last year when you protested last year’s social media tax. Now Dad is gone because of your involvement in this year’s fees must fall. Now you want to kill us!,” says David. Police patrols man the gate of his Makindye residence since Wednesday. It is alleged that they were deployed by government operatives to exert some pressure on the family so they can force the student activist to either back down or resign his stay from home. In the process, some of his sisters have since fled to exile for safety of their lives. One of the siblings we spoke to off record revealed the stressful phone calls from strange numbers. ”They call on my phone every morning. They tell me to either force David out of home or the family will face it,” she says.

Tired of these endless intimidations on his family, Musiri David has opted to vacate home so he can grant his relatives some relief. With no where to go yet, David may be implored to seek refuge among his companions to start a fresh life. He says his life has been messy since police meted out brutality on him. His family members have long been asked to bring him councillors to lure him out of the struggle. ”My own brother showed me text messages from state officials asking him to kick me out of home if I don’t show remorse. They unanimously resolved to throw me out of home,” David says. ”I’m leaving without a coin. I cannot be employed anywhere because employers fear having me in their premises. I lost my first job during togikwatako protests,” he adds. David maintains he is a hard-working soul with passion for work. ”I am not lazy, I can do any work for survival,” David says. Musiri is not the only activist undergoing this trauma. Many other activists have undergone similar situations. Majority have confessed isolations, evictions from workplaces among other things. Musiri joins the thousands of Ugandan outspoken youths whose dreams have directly been suffocated by the government.