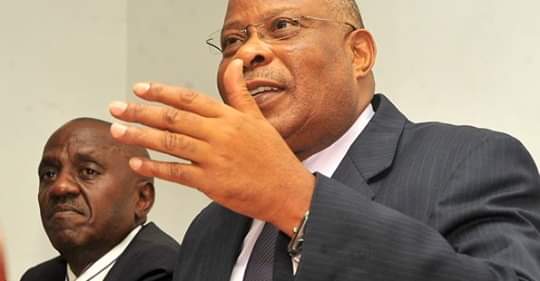 Yesterday at exactly 7:30am, traffic at Mulago hospital road came to a halt following a shocker that had ensued. It was the human rights boss suffocating in his V8 land cruiser following a cardiac attack. The scene was just metres away from Mulago national referral hospital where he probably could have been rushed to for first aid. The other unfortunate bit of it was the fact that it is allegedly a professional doctor who was among the first people to reach to the deceased after the door screen had been shattered by police. Eye witnesses who were present at the time of the tragedy say Mr. Meddie’s vehicle suddenly stopped and knocked the car which was infront. It parked in the midst of the road. It remained locked and the only option was a break in from concerned bystanders who noticed him convulsing and unresponsive.

Unfortunately, a weak Meddie was to be driven to Case Clinic which is over 2kms away from the scene where he met his fate. What remains surprising is that the unmentioned Mulago doctor could not suggest his own work place as the first aid point but chose Case Clinic. In yesterday’s press address bu the Medical Director of Case Hospital it was approved that the deceased was brought in by a Mulago doctor. “The doctor started a one man CPR resuscitation) with mouth to mouth respiration and cardiac compressions. He was brought in to Case ICU while still unresponsive and on basic life support. No vital signs of life were detected on arrival,” Dr. Kaliika said in a statement.

The deceased is not the first top official to shun Mulago’s treatment. There have been several other cases of government officials declining to associate with Mulago hospital as their choice of treatment. On many occasions, diaspora treatment is their best consideration. What has purtabed the taxpayers’ is the elevating mistrust those in government have for Mulago. Many hold a perception that this facility perhaps lacks the capacity to treat certain cases and health complications. Dr. Derrick Sserunjogi a medical intern from Makerere University attributed this to government’s reluctance in facilitating its institutions with both human resource and equipment. “It is true and justifiable for them to shun what they created because they well know the equipment are non-existent,” says Dr. Sserunjogi. Perhaps if they can’t stock drugs and necessary equipment then they have all reasons to opt for other choices.