Government on the spot over brutality meted out on Besigye 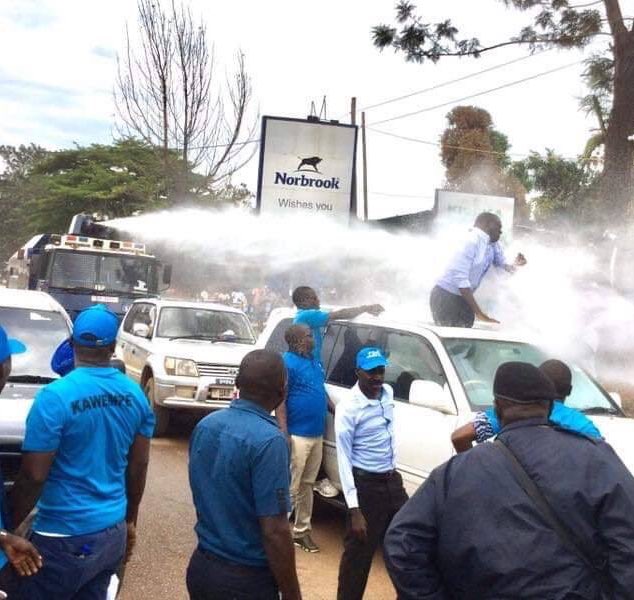 A few weeks ago, Police fired waters canons at Besigye who was a top his Toyota Land Cruiser on his way to Namboole for the FDC General Assembly to subdue him and the same officers later smashed Besigye’s car windscreen, spraying him with pepper and violently arresting him before he was rushed to Naggalama Police Station.

Parliament put Government on the spot over brutality meted out to Besigye  and Obiga told parliament that on receipt of a letter from the FDC spokesperson, Ssemujju Nganda about their intended activity, AIGP Asuman Mugyenyi asked them to provide proof of permission from the Namboole stadium management but also suggested that the seminar be held indoors.

He added that police also asked the opposition party to provide them with a copy of the day’s program but they never got any response.

“On November, 4 , 2019, at 10.00 am, FDC members led by their leaders, who included Patrick Amuriat Oboi, Ssemujju Nganda and Dr Col Kiiza Besigye forcefully attempted to access the proposed ground (Nambole Stadium parking yard).Upon realizing that the premises had been sealed off, the leaders directed their supporters who had gathered and were now numbering about 500 to proceed to their (FDC) offices in Najjannakumbi. Soon a rowdy procession started heading towards Kampala Central Business District,”Obiga told parliament.

He also noted that the group chanting Twerwaneko started moving towards the city centre were intercepted by police at Kireka market but they defied police orders not to continue with the procession and instead parked their vehicles in the middle of the road blocking and paralyzing traffic flow.

The Internal Affairs junior minister said police engaged Besigye who had emerged as the de facto leader of the procession but he refused to heed to advice from the law enforcement officers creating a standoff that resulted into the injury of three police officers and damaging two police vehicles.

Minister Obiga said the fracas continued when Besigye drove up to Nakawa Spears Motors junction where he parked and paralysed traffic and Police had no choice but use reasonable force to remove Dr. Besigye and other occupants out of the vehicle. “This action on the part of the police is provided for in section 3 subsection 2 of the criminal procedure code Act (Cap 176) and section 27 2(b) of the Police Act (Cap 303),”Obiga noted

In total, he said 56 suspects were arrested and detained at Kiira road Police station and charged with inciting violence but noted that there is a growing trend of disrespecting the Police Force by hurling insults at them while they are doing their job.