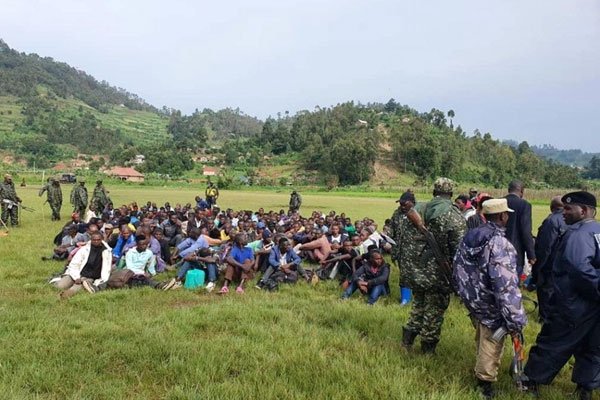 Over 32 Rwandan nationals were Wednesday deported back to Rwanda, just hours after their Government called off a Cecafa game with Uganda saying the Rwandan players are not safe in Uganda.

The Rwandan deportees were arrested in a joint security operation that involved the army and police in Russia, Muline and Karumena in Kisoro District.The operation netted more than 200 people and some of them did not have proper identification documents.

After a thorough screening exercise, a huge number of them were released while those who were found to have entered Uganda were paraded before before KisoroGrade one magistrate Raphael Vueni and charged them with illegal entry into Uganda.

Three Rwandan suspects pleaded not guilty to the charges and were remanded to Kisoro Prison until December 18 while 32 others pleaded guilty and asked for a pardon.

On Wednesday Grade One magistrate Raphael Vueni ordered Ugandan security and immigration teams to deport them to their respective countries because they failed to follow proper procedures to stay in Uganda.

After the verdict, 32 deportees were whisked to Chanika and Bunagana border posts where their deportation documents were processed and handed over to the respective authorities.

According to Capt Peter Mugisha, the Kisoro Resident District Commissioner, the operation was aimed at reducing rampant cases of murder, rape, robbery and theft; among other crimes in Kisoro District because residents have been accusing security agencies for failing to identify suspected criminals from neighbouring countries and had resorted to mob justice to fight the crimes.

Uganda and Rwanda have been at loggerheads since the beginning of this year when Kigali closed off Gatuna border post and advised trucks from Uganda to only enter Rwanda through the Kagitumba-Mirama Hills border post in Ntungamo District.