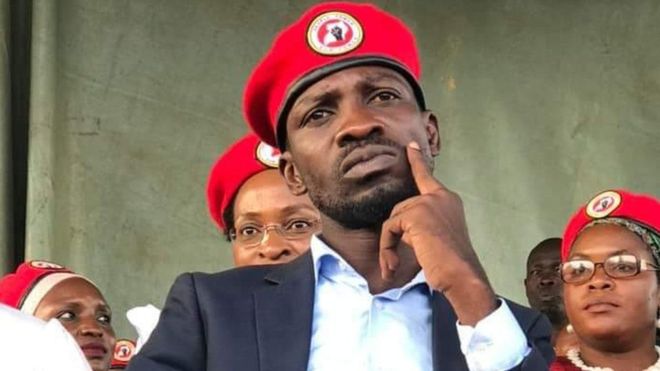 Government has asked the landlord not to proceed with sale of land in Kamwokya where Kyadondo East MP Robert Kyagulanyi, alias Bobi Wine, and 400 others are facing possible eviction after a foreign investor bought the land.

The ISO Director Col. Kaka told one of our sources that it is not acceptable for someone to evict masses of people in a way that is not clear adding that they would work as government to protect the many People who stay on this land.

In March this year, after a meeting with the landlord Mr David Ssenfuka, the ISO boss intervened in the saga saying the matter had become political where some MPs were peddling threats to the land owners without following the law.

Sources that attended the meeting said that government had asked Mr Ssenfuka to halt the intended sale of the land until after 2021 elections because the controversy could swing a sympathy vote in favor of Bobi Wine who early this year pronounced his intention to stand for president.

David was told to halt the matter until 2021 but he insisted and now Government has started calling him a fraud, One source narrated

Col Kaka denied the allegation that government was only intervening for fear of political backlash. He said government is fighting for the common people adding that they learnt that this is another way some mafias are trying to fleece money from the government.

“It is true I met this man (Mr Ssenfuka) but we later came to learn that this is another way some mafias are trying to fleece money from the government. We even don’t know whether Mr Ssenfuka owns that land and if he must evict people, he should first compensate them,” Col Kaka noted

The land in question sits on 26 acres shared among three zones, Old Kira Road zone, Kisenyi zone and Mulimira zone which partly fall in Nakawa Division and Kampala Central Division. On August 12, Mr Ssenfuka agreed to sell the land to a Gabonese businessman, Mr Ulrich Anass Bongo Ngoyi, at Dirhams 55.2m (about Shs55b) with the first instalment of Dirhams 27.6m (about Shs27.5b) to be paid by cheque.

However, Mr Ssenfuka said the cheque was rejected when he presented it to the bank because the purchaser had blocked the cheque pending conclusion of the ongoing dispute on the land.

Bobi Wine, one of the claimants on the land, had sued Mr. Ssenfuka and secured a court order halting the sale until the litigation had been concluded but Mr. Senfuka maintained that the land is his if Government wants to save it then they should pay for it on behalf of the People.

By last evening, Bobi Wine still maintained his position that the intended eviction is illegal adding that It is unfortunate that this has become a political matter to persecute him but this is at the expense of the many people on this land yet they all have lives on the same land