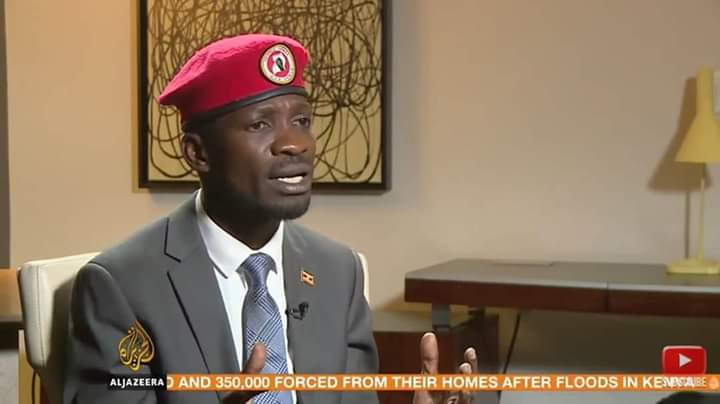 Kyadondo East Legislator Robert Kyagulanyi aka Bobi Wine has warned that the people of Uganda will rise up if [President Yoweri] Museveni tries to rig in the 2021 polls or even trying to stop Bobi Wine from vying.

Speaking to Aljazeera on Saturday morning, Bobi Wine said the winds of change are sweeping across the Continent and they will soon reach Uganda so 2021 is a year to look out for.

“I did not say people may rise up. I said people will rise up to claim their country if President Museveni stops us from participating or rigs the election,” Bobi Wine said.

Bobi Wine revealed that the Opposition Leaders are in advanced stages of agreeing to front a joint candidate ahead of the 2021 General Elections which are expected to be crucial polls in the history of Uganda.

“We want to confront the dictatorship with one strong voice,” he said.

If Elected as the President of Uganda in 2021, Bobi Wine says his administration would put an end to corruption, dictatorship, cleaning the health system that “is sick itself”, education system and mobilizing People’s voices to surpass the voice of the guns.

“We want the voice of the people to surpass the voice of the guns. We want to put an end to dictatorship and install civilian authority. We want to revive the education system and awaken the healthcare system. We want to return the rule of law and dignity to the people of Uganda. We want to unite our people that have been divided along ethnic lines, social class, political party lines. We want to create an environment where Ugandans in America, Europe, etc feel blessed return and rebuild their country,” Bobi Wine said when asked about his plans for Uganda.

Bobi Wine vowed to continue the struggle for freedom in Uganda despite state restrictions and intimidation maintaining his stance to fight on alongside the youth, urging them to stand up for what they believe in and never to give up until they get the freedom and dignity they deserve.

“Am going to continue the fight for freedom and it is the fight we must either win or die trying,” Bobi Wine told Aljazeera.