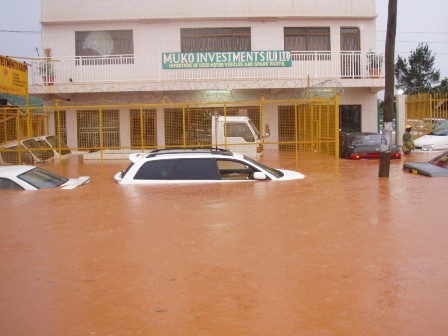 Sgt Godfrey Mwondha, a marine officer with the Uganda People’s Defence Forces (UPDF) is among the five people who were washed away by floods that ravaged Kampala City on Saturday.

According to Kampala Metropolitan Deputy Police Spokesman Luke Owoyesigyire, Mwondha was found in Mbuya Katoogo swamp, which is often used as a washing bay and officially pronounced dead at Kiswa Health Center in Bugolobi, where he had been taken in critical condition.

“Three people died after being washed away by fast running water. Among them is a UPDF marine officer who had been deployed to rescue a person who was washed away by floods,” Owoyesigyire said.

Sgt Mwondha died trying to rescue a one Ssekitoleko of Biwologoma, Kira Division who was drowning and Bodies of both victims were retrieved on Sunday morning trapped at Katoogo village in Mbuya, Nakawa Division, in Kampala.

Another body of a woman identified as Joweria Tumusiime, a resident of Zana Lufuka, working with Nippon cleaning services was also taken by fast running water at Zana Lufuka.

Floods made electricity wires sag, causing the electrocution of a woman identified as Agnes Naiga and her daughter Lilian Nakogogwe. They were residents of Sembule zone in Rubaga Division.

“It’s alleged that while Naiga was hanging clothes during the early morning downpour, her hanging lines touched live wires transmitting electricity and she was electrocuted. Her daughter who tried to save her was also electrocuted,” Owoyesigyire said.

All bodies of the deceased were taken to city mortuary for post-mortem and Investigations are ongoing.