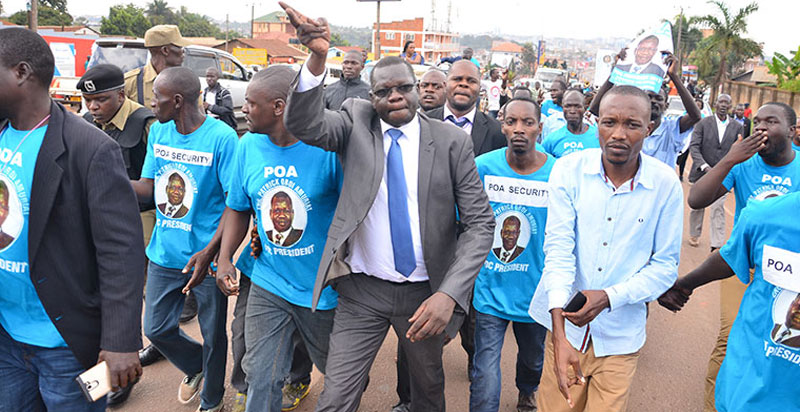 The Namayingo  Forum for Democratic Change Chairperson has been arrested for using details from the Electoral Commission’s national voters’ register to fill the party International Criminal Court petition against President Museveni.

A few weeks ago, FDC Started a campaign aimed at collecting signatures from several Ugandans before asking the prosecutor of the ICC, Justice Fatou Bensouda to prosecute President Museveni and several implicated government officials over alleged crimes against humanity.

However, according to police spokesperson, Fred Enanga, the Joseph Wanjala,44 the party chairman for Namayingo was caught red-handed coping details from the voters’ register for Rabolo Jesus restoration church at Lolwe sub-county to fill the petition.

“This followed a tip off from concerned residents on how he had an Electoral Commission national voters’ register that he was using to fill the ICC petition. He was coping names and National Identification Numbers (NINs) from the register and filling the petition,” Enanga said.

Enanga noted that Wanjala had pressed his own thumbprint against each name he wrote to signify alleged ownership adding that several statements have been obtained from witnesses whose names had been inserted in the petition without their consent.

“Both copies of the national voters register and the register to petition ICC recovered and exhibited. Thumbprints have been taken from the witness to compare with the ones of the witnesses.”

Forum for Democratic Change party officials recently said at least 60,000 people had already appended their signatures on the hard copies of the forms for the ICC petition adding that more forms were being dispatched to various districts around the country for members of the public to sign.

“So far the response has been overwhelming. We may close the exercise earlier than anticipated and we are likely to get more than two million signatures,” Ingrid Turinawe, the FDC secretary for mobilization said last month.

However, the Deputy government spokesperson, Col. Shaban Bantariza recently said FDC’ s People’s Government undertaking the collection of signatures is doing it illegally adding that It is an unregistered non- governmental organization that has no mandate to refer anyone of us to ICC.